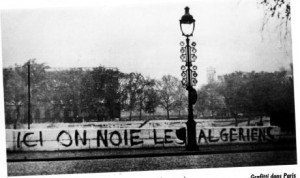 On the 17th of October 1961, just seventeen years after he had expelled nearly 1,600 French Jews to concentration camps to the East, the former Nazi collaborator, Maurice Papon – obscenely and most bizarrely placed as Prefect of the Paris Police since 1956 – once again seized the opportunity to unleash his racist bloodlust, this time upon France’s beleaguered Algerian community.

Using as his excuse Algerian freedom fighters’ continued violent reprisals against France’s vicious methods of preventing their country’s independence, Prefect Papon ordered Parisian police to attack an illegal but peaceful demonstration composed of around 30,000 French-Algerians, all of whom were protesting the Prefect’s decision to impose an 8.30 pm – 5.30 am curfew upon all “Algerian Muslim Workers”, “French Muslims” and “French Muslims of Algeria”, as he variously described them.

Eager to showcase their plight to the outside world, the Algerian protesters cleverly congregated at Parisian landmarks, especially along the Grands Boulevards between Republic and Opéra, where they felt sure that the presence of women and children would make clear their peaceful intentions. The reality was startlingly different, however, as the early arrival of 7,000 police and gendarmes mobile (riot police) sent both tourists and Parisians scurrying, the latter so cowed by seven years of colonial unrest since the outbreak of the Algerian War in 1954 that they closed up their famous wooden-slatted shutters and awaited the dawn. Across the city, thousands of Algerians defying Prefect Papon’s 8.30 curfew were arrested, detained and brutally tortured at police stations and other centres, whilst many protesters were beaten unconscious and drowned in the River Seine. At the Pont de Neuilly – Paris’s gateway to the suburbs – police shot dead many more, who were also hoisted into the Seine until, by daylight, at least 200 Algerians had been murdered.

How was such a prolonged and murderous attack on the streets of one of Europe’s greatest cities kept such a secret from the outside world, kept secret even from the French themselves? Only through systematic and institutionalised racism is how. Journalists from the Times, Time magazine and the New York Times all downplayed the severity of the massacre, instead printing General De Gaulle’s government’s claim that only four deaths resulted from the police action; the press from the rest of the so-called Democratic nations somnambulantly following suit. Indeed, the American journalist James J. Napoli as recently as 1997 reported the event directly from a colleague who had failed to secure contemporary publication of his own eyewitness report, despite seeing – in Napoli’s words – ‘bodies of Algerians piled up like cordwood in the centre of the city’.

At this point we are left only to ask why on earth was a known Nazi collaborator such as Maurice Papon allowed to slip so seamlessly into the postwar French regime, and in a position of such great authority in this cultural capital city? Worse still, Papon had previously been an administrator in Algeria itself, where he was well known for his racist administration. That General de Gaulle could have been unaware of this quisling’s racist tendencies is impossible; and that de Gaulle could have supported such actions from a known Vichy collaborator hugely undermines his entire Free French époque. Perhaps the answer is too prosaic for we Moderns to reach easily, for we have in Britain never sent our Jewish neighbours to be gassed on some foreign soil by hideous ingrown maniacs in thrall to an all-time tyrant. The citizens of Paris, however, had done just that, and only 17 years previously.