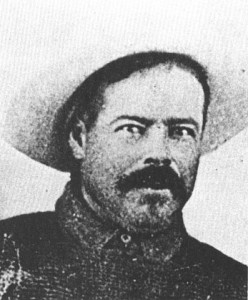 Today we make note of the splendidly awful murder of that outrageous Mexican Revolutionary Pancho Villa on this day in 1923, whose bulging-eyed corpse – exploded by nine fatal bullets – was left upside down hanging out of his trashed Dodge automobile, the blood, the gore, the smashed glass ensuring that, even in death, this world class self-publicist would let no-one down. Ah, was there ever another revolutionary like Pancho Villa? What a trainwreck personality he was: his serial womanising, his forced marriages. Sure, he invented the legendary dynamite filled  ‘loco loco’ so beloved of Spaghetti Westerns, but he also allowed the systematic rape of enemy women. And when plans backfired on him, General Villa would react like a John McEnroe-ninny, a Hitlerian baby, a whinging tantrum-throwing bully, sending his murderous henchman Rodolfo Fierro off to execute unnecessarily and create yet another world media disaster. Then new heroic escapades would inevitably once more endear Villa to an intrigued public who vacillated wildly in their opinions of him. Furious with American President Woodrow Wilson, Villa audaciously raided the US town of Columbus while 600 troops guarded the garrison – it was the first and only attack of its kind ever made on the U.S. mainland. Vengefully pursued for months across the north of Mexico by America’s hero of World War One, General John Pershing, Villa simply returned to his old bandit tricks, hiding in caves until Pershing gave up. At his career height, Pancho Villa’s Hollywood contract obliged him to hold off executions until after sunrise, and real life footage from his own battles was interspersed with close-ups in which he was played by a far younger man. And yet, until he and his soldiers had been co-erced into smart Hollywood procured uniforms for the benefit of the movie cameras, Villa himself had been quite content to lead his legendary Division Del Norte dressed in a crumpled cream suit and English-style pith helmet. Utterly uneducated, unsure of himself at first, even tending to develop a teen-style crush on any revolutionary intellectual who took him seriously, Villa was the bandit who only gradually understood the nature of his country’s revolution, and who only gradually understood what role he could best play. Nevertheless, Pancho Villa’s intuitive grasp of socialism must surely best be summed up by this comment:

“What else is there for the rich to do,
If not to relieve the poor of their misery?”