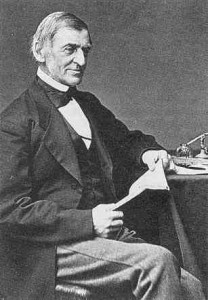 The Sage of Concord

He’s been called the “prophet of his generation,” “America’s Plato,” “the Sage of Concord” and “the single most influential figure in American literary history.” Today we celebrate a true colossus – Ralph Waldo Emerson – who died on this day in 1882, aged 78. Literary giant and cultural pied piper, Emerson’s contributions to American thinking, to its very psyche, cannot be overstated. Like Goethe in Germany and Coleridge in Britain, Emerson is at the very fundament of American higher thought. As a poet, essayist and lecturer, he was the first to envision a unique national literary identity and verily defined its style. As friend and benefactor, he inspired and facilitated other American luminaries such as Henry David Thoreau, Walt Whitman and Nathaniel Hawthorne. As a reformer, he cautioned against the dangers of materialism and tirelessly crusaded for abolition, women’s emancipation and justice for Native Americans. And as a thinker and visionary prophet, Emerson had a crucial impact upon the course of American philosophy and religion: one of the founding fathers and the leading expositor of Transcendentalism – “What is popularly called Transcendentalism among us, is Idealism” – this former minister would transform a young nation from a parochial theocracy to a secular democracy. Gathering around him in Concord a “genius cluster” of writers, poets, reformers and freethinkers – Thoreau, Hawthorne, Margaret Fuller, the Peabody sisters, the Alcott family, Jones Very, Ellery Channing and George Ripley among them – the new and radical ideas of Emerson and the Transcendentalists would prove to be nothing less than  America’s second revolution.

But beyond his esteemed position as the central figure of American literary and philosophical thought, we must also remember and venerate Emerson as a universal High Priest of Individualism. His views on the mystical harmonies of humanity and nature, the essential perfectibility of the human spirit, the unity of the human soul with the divine Over-Soul, and the values of non-conformity, intellectual and spiritual independence, utopian friendship and self-reliance make him a law-giver not just of his own era, but of All Time. A radiant prose writer and one of the great “men of letters” – he kept a journal for 55 years and delivered more than 1500 lectures – Emerson published some of the most seminal essays in the nineteenth-century canon. Nature, Representative Man, The Poet, Friendship, The Over-Soul, Spiritual Laws and Self-Reliance remain required reading for Individuals, Utopians and Non-Conformists (all are available to read online here). His prescient views on nature, his emphasis on self-reliance, his vision of the God Within, and his relentless optimism – that “life is a boundless privilege” – render him one of the most useful ancestral voices.

Brilliant, bold, visionary, altruistic. He was a hell of a man and one of my absolute heroes.

“Whoso would be a man, must be a nonconformist. He who would gather immortal palms must not be hindered by the name of goodness, but must explore if it be goodness. Nothing is at last sacred but the integrity of your own mind. Absolve you to yourself, and you shall have the suffrage of the world.”