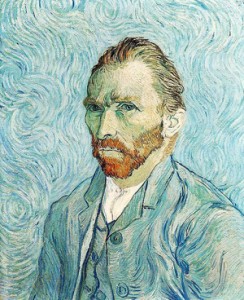 On 27 July 1890, Vincent van Gogh, an unkempt, unknown 37-year-old Dutchman, walked out of his lodgings in the village of Auvers-sur-Oise, just north of Paris, where he had been living and working since May. That day instead of his usual easel and paints, he carried a handgun he had perhaps borrowed from a farmer ‘to scare away the crows’. He intended to kill himself.

An habitual self-harmer, only two years before Vincent had mutilated his ear.

Wracked by mental torment, frustrated by his illness (probably a deadly cocktail of bipolar disorder and porphyria combined with alcoholism, poor diet, overwork and insomnia) he now feared he was a burden to his beloved brother Theo. Theo had supported him – believed in him – in every possible way for the past 10 years but Theo now had a wife and baby son to support too. Desperately lonely, his once overwhelming christian faith long evaporated, Vincent only had his painting left to believe in. But no one was buying.

No one knows exactly where he was when he pulled the trigger. Legend has it he was in the rolling wheatfields at the back of the village. More likely he scurried quietly into a barn. He shot himself in the stomach. Bleeding heavily he somehow managed to stagger back to his lodgings. He went to bed, lit his pipe and waited for the inevitable.

Vincent’s quack homeopathic doctor, Paul Gachet, who Vincent believed to be as mentally unstable as he was, was called for. The bullet was too deep. There was nothing to be done to save him. Infection quickly set in. Theo arrived on the next train from Paris. Theo stayed with him until 1.30am on 29 July 1890; where he died in Theo’s arms in that pokey, gloomy attic room.

An unposted letter to Theo was found on Vincent’s body. In it, Vincent described a painting he had recently finished: Wheatfield with crows. He said it depicted “vast fields of wheat beneath troubled skies,” adding “I did not have to go out of my way to express sadness and extreme loneliness.”

Dr Gachet made a sketch of Vincent lying dead.

The church at Auvers, which Vincent had only recently painted, refused to host Vincent’s funeral because he had killed himself. So much for god’s mercy. The service took place across the river at Mery-sur-Oise the next day.

Vincent’s friend, the young painter Emile Bernard, was there:

“The coffin was already closed. I arrived too late to see the man again who had left me four years ago so full of expectations of all kinds. On the walls of the room where his body was laid out all his last canvases were hung making a sort of halo for him and the brilliance of the genius that radiated from them made this death even more painful for us artists who were there.

“The coffin was covered with a simple white cloth and surrounded with masses of flowers, the sunflowers that he loved so much, yellow dahlias, yellow flowers everywhere. It was his favourite colour, the symbol of the light that he dreamed of being in people’s hearts as well as in works of art. Many people arrived, mainly artists, among who I recognised Lucien Pissarro … also some local people who had known him a little, seen him once or twice and who liked him because he was so good-hearted, so human…

“At three o’clock his body was moved, friends of his carrying it to the hearse, a number of people in the company were in tears. …his brother, who had always supported him in his struggle to support himself from his art was sobbing pitifully the whole time…

“The sun was terribly hot outside. We climbed the hill outside Auvers [towards the cemetery] talking about him, about the daring impulse he had given to art, of the great projects he was always thinking about, and about the good he had done to all of us. We reached the cemetery on the little hill above the fields that were ripe for harvest under the wide blue sky that he loved. Then he was lowered into the grave.

“Doctor Gachet (who is a great art lover and possesses on of the best collections of impressionist painting at the present day) wanted to say a few words about Vincent and his life, but he too was weeping so much that he could only stammer a very confused farewell. He was, Gachet said, an honest man and a great artist, he had only two aims, humanity and art. It was art that he prized above everything and which will make his name live.”

Vincent has been my teacher and inspiration since the muscular yellows of ‘The Sunflowers’ hit me squarely in my 16-year-old face like a lightening bolt at the National Gallery, London. If you think you know this painting from the zillions of reproductions, I can assure you, you don’t. Make the trek to London and see it for real. And take sunglasses.

Every year on 29 July I think of Vincent lying in Theo’s arms as death finally healed him. Heartbroken, 33-year-old Theo followed Vincent to the grave just six months later. Theo’s widow, Johanna, inherited all but a handful of Vincent’s 900 canvases and more than 1,000 drawings. She would spend the rest of her life promoting her brother-in-law’s ground-breakingly colourful, life-affirming paintings.

The legend had begun.