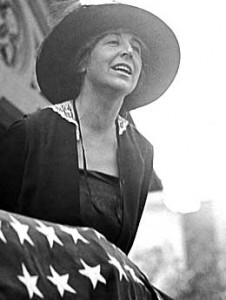 “We’re half the people; we should be half the Congress.”

On this day in 1917, the first woman elected to any national legislature in a Western democracy took her seat in the U.S. House of Representatives. And Sisters, our first-ever political representative didn’t let us down. Three full years before most American woman would win their battle for the right to vote, militant suffragist Jeannette Rankin was elected to represent the state of Montana – which, thanks to Rankin’s own efforts, had in 1914 enfranchised women. Only a month into her term, on 2nd April 1917 President Wilson called a special session of the 65th Congress to decide if America should enter World War I. Like most reformers, the suffragists opposed this misguided war of the ruling classes. Rankin’s sisters nevertheless urged her to approve the resolution – believing that opposition would damage the women’s cause. But when the House gathered to vote, Rankin defied this hypocritical policy of appeasement. As the Clerk of the House called out her name, Jeannette Rankin broke with congressional precedent by rising to her feet and announcing: “I want to stand by my country, but I cannot vote for war. I vote No.”

Three decades later –  following a twenty-year break from the politics of Washington, during which time she travelled the world as an ambassador for peace – Rankin was re-elected to Congress just in time to vote on America’s entry into the second world war. Convinced that the Japanese bombing of Pearl Harbor was provoked by President Roosevelt’s deliberate policies, on December 8, 1941 Jeannette Rankin cast the one and only vote against the U.S. declaration of war on Japan. “As a woman I can’t go to war,” she stated. “And I refuse to send anyone else.”

Rankin was pilloried for her unpatriotic convictions, but in the ensuing scandal, The Emporia Gazette recognised and acknowledged (if somewhat bregrudgingly) a rare bird of integrity:

“Probably 100 men in Congress would have liked to do what she did. Not one of them had the courage to do it. [The Emporia Gazette] entirely disagrees with the wisdom of her position. But Lord, it was a brave thing.”

Jeannette Rankin blazed the trail for future generations of female politicians, and in her we could ask for no better exemplar. In addition to her courageous stance against imperialistic war-mongering, she leveraged the congressional debate on women’s suffrage, introduced legislation to provide state and federal funds for health clinics and midwife education, and called for radical political reforms including civil liberties, birth control, equal pay and child welfare. And on this day back in 1917, taking her seat amongst 434 congressmen as the first and only female House representative, Jeannette Rankin had a clear and decisive vision of the future. “We’re half the people; we should be half the Congress,” she declared.

Today, women hold fewer than 13% of the world’s parliamentary seats, while here in the so-called progressive UK, only 19% of our MPs are women. For as long as the balance of power remains with men, they will continue to represent only their own world views and interests. We know from other countries like Sweden and Rwanda that quotas produce results, and only with equal representation can we even begin to redress our sham of a political system. Is it not high time to finish the job Jeannette Rankin started?