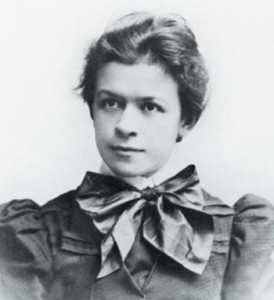 On this day in 1948, Mileva Maric died alone and unknown in Zurich aged seventy-two. “Few stories in the history of science are as heartbreaking [as hers],” claimed the New Scientist. A brilliant woman born in the late 19th century, her aspiration to be a physicist was always going to the thwarted by gender discrimination. But she had the added misfortune of falling in love with the most celebrated genius of the modern era, Albert Einstein. In the beginning, theirs was a relationship of shared studies, experiments, ideas and mutual inspiration. But as Albert ascended into the scientific stratosphere, Mileva was relegated to domestic duties. Increasingly lonely and isolated, she became prey to her own crippling insecurities, which plunged her into the deepest depressions. It was a tragic fate for a woman who was not only a genius in her own right but who also may very well have contributed to the theory of relativity.

In 1896, twenty-one-year-old Mileva Maric began studying physics at the exclusive Swiss Federal Institute of Technology in Zurich. Only the fifth female student to pass through its venerated portals, it was here that she met 17-year-old Albert Einstein. The two studied together, achieved similar grades and, in 1898, became a couple. Einstein graduated in 1900, while Maric tried twice to obtain a diploma – but her efforts were disrupted when she fell pregnant in 1901. They married in 1903 and had two more children.

Evidence in the form of letters suggests that during these momentous years, when Einstein was composing his epoch-making theories, Maric played a significant contributory role. She is known to have worked with her husband to patent an instrument for measuring small electrical voltages – although, tellingly, her name does not appear as co-author. She also corrected the proofs of several of his papers. Einstein repeatedly referred to “our work”, “our investigation” and “our theory”. In one letter he wrote, “How happy and proud I will be when the two of us together will have brought our work on the relative motion to a victorious conclusion!” A colleague, Russian physicist Abraham F. Joffe, even claimed that the legendary quartet of brilliant papers – among them “Special Relativity” – bore both Einstein’s and Maric’s names.

After the publication of  the “Annus Mirabilis” papers in 1905 – heralding the birth of modern physics that would change the course of history – Einstein’s fame was on the ascent. With it came a new coterie with whom he could discuss atoms, and Maric’s intellectual and inspirational capacities were no longer required. He would, however, for ten more years continue to rely on her for the humbler duties of running his household and mothering his children. They separated acrimoniously in 1914 and divorced two years later. As part of the settlement, Einstein promised Mileva his future Nobel Prize money which she duly received.

In 1919, observations of a solar eclipse proved the General Theory of Relativity. Soon after, Einstein moved to America with his new wife, Elsa, and was feted forever after. Maric – who collapsed and had to be hospitalized when Einstein demanded a divorce –retreated into obscurity, loneliness, financial insecurity and blackness. Robbed of her impetus, she never authored a scientific paper.

Two things have brought Mileva’s story to the forefront: the discovery in 1986 of correspondence between Einstein and Maric (published as The Love Letters); and, in 2003, a somewhat spurious documentary, Einstein’s Wife. In its efforts to unearth Maric as a lost heroine, the film backfired with its needless mythologising and, worse, factual inaccuracies. The venomous response from the science community, however, corroborated the documentary’s underlying message that biographers and Einsteinists have portrayed the indisputably brilliant Mileva Maric as little more than a “shoddy housekeeper” who “hoodwinked the great man out of his Nobel Prize money.”

In 1904, Albert Einstein was alleged to have written about Maric: “Without her I would never have started my work.” His genius cannot be disputed. But, at the very least, her role blurs our existing notions of Einstein’s heroic solo efforts. Albert Einstein would never again produce physics on a par with the work of 1905.

Finally, it is worth noting that only three women have the distinction of winning the Nobel Prize in Physics, awarded annually since 1901.