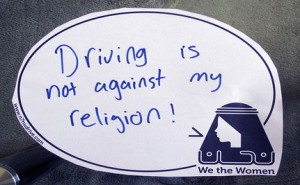 “We the Women” declaration – Saudi women campaign to drive

On this day in 1990, forty-seven Arab women staged a remarkable protest against Saudi Arabia’s unwritten “law of convention” prohibiting women from driving. At the time, Saudi Arabia remained the only country in the world to violate this basic human right of freedom of movement. And so, in a display of unimaginable courage and stunning defiance, these women from Riyadh’s intelligentsia took hold of the steering wheel and, accompanied by supportive husbands and brothers, drove around the country’s capital in a convoy of fourteen cars. According to one of ‘the drivers’ – as the 47 women came to be known throughout Saudi, the action had been planned carefully so as “not to be too antagonistic to the culture. We were mothers, well covered, nothing anti-Islam.”

Thirty minutes into drive, however, the convoy was brought to an abrupt halt by the Mutawaeen – the special youth police force whose sole purpose is to enforce Saudi Arabia’s strict Islam, and who are answerable only to the king. But when the Mutawaeen jeered the women, calling them “whores” and “prostitutes”, the 47 stringently and defiantly defended their actions: “In time of war mobilization and national emergency we need to drive for the safety of our families,” they argued. In addition, they maintained that driving was not un-Islamic as evidenced by women riding donkeys and horses during the time of Prophet Muhammad. But the Mutawaeen were unyielding and dispatched both the women and their chaperones off to police headquarters for interrogation, where the men were obliged – before they could be released from custody – to sign legal documents ensuring that the women would never drive again. It was a self-policing move of which Chairman Mao’s Red Guard would have been proud.

Inspiration for the protest of the forty-seven had occurred quite recently at the outbreak of the first Gulf War when Saudi women had first watched female American soldiers driving jeeps through the streets of Riyadh. Emboldened by the huge presence of the world’s media, the 47 women gambled that the Saudi government would feel compromised and, for diplomatic reasons, ensure that their response appeared measured. Alas, this was not to be. The following day, the government had leaflets distributed throughout Riyadh denouncing the women. The leaflets called them ‘whores’ and accused them of wearing shorts, and disrespecting and assaulting the mutawaeen. Even more cruelly – and in a move unprecedented even in Saudi Arabia – on each of the leaflets was printed the name, address and phone number of each of the 47 drivers. The leaflets concluded with the terrifying official message: “Do what you believe is appropriate regarding these women.”

Within hours, more than 20,000 Mutawaeen and fundamentalist supporters had converged on the governor’s palace demanding that action be taken. As the protests escalated, a news blackout was ordered – muzzling any progressive support for the women. Interior Minister Naif bin Abdulaziz now declared the drive-by ‘un-Islamic’ and ordered the suspension or firing of the protestors from their jobs. The 47 next had their passports confiscated, and both they and their male chaperones were banned from travelling abroad. Such was the negative response throughout the country that the 47 women have endured death threats and social stigma to this day.

It would be another two decades before a new generation of Saudi women summoned the courage to again defy this unashamed violation of their human rights. In 2011, Manal Al-Sharif filmed herself driving and posted the video on YouTube and Facebook. Like the 47 who inspired her, Al-Sharif was subjected to arrest and intimidation – the Saudi authorities particularly fearful of protest in context with the Arab Spring. But under the watchful eye of social media, the campaign for women to drive could no longer be squashed. On 27 September 2017, a royal decree issued by the King Salman at long last lifted the ban.

Despite this massive victory, Saudi Arabia remains the most gender-segregated nation in the world. Women are unable to do basic things like swim in public or try on clothes when shopping. Most cripplingly, Saudi women are at the mercy of a male guardianship policy: all women, no matter their age, are treated as a minor and must live under the authoritative supervision of a male. Such abuses of human rights are no different from the Jim Crow laws of America’s Deep South and South African apartheid – contemptible, inhumane systems condemned worldwide by civil rights advocates.

Gender segregation in Saudi Arabia is not a feminist issue. It is a humanist issue.