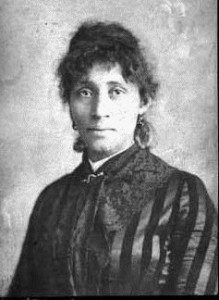 “More dangerous than a thousand rioters”

Today we pay tribute to one of the great figures in the battle for working class rights – a woman whose impact was so powerful that the Chicago Police Department branded  her “more dangerous than a thousand rioters.” As a Native-, African- and Mexican-American woman born into slavery, raised in poverty and terrorised in the hate-fuelled KKK milieu of post-Civil War Texas, Lucy Eldine Gonzales Parsons probably had more reasons than most to dedicate her life to turning the world upside down. And so it was that,  for almost seven decades, she fought tirelessly on behalf of the oppressed.

Lucy’s life as a revolutionary began in 1873 when she moved to Chicago after she and her new husband, former Confederate soldier Albert Parsons, were forced to flee from persecution to their interracial marriage. The Parsons soon became prime movers in Chicago’s burgeoning anarchist movement – Albert as a labour organiser, while Lucy was catapulted to infamy following the publication of her incendiary written plea “To Tramps,” which encouraged the poorest to rise up against the rich.

Her place in history was unwittingly cast when, on 1st May 1886, she and Albert led 80,000 striking workers in a peaceful demonstration as part of the general strike for the eight-hour workday. Three days later, during a labour rally at Chicago’s Haymarket Square in response to police violence against strikers, an unknown person threw a dynamite bomb killing seven police officers. Without any evidence connecting them to the crime, eight leading Chicago anarchists including Albert Parsons were arrested and charged with conspiracy to murder simply because of their revolutionary beliefs. Lucy travelled across the country leading the charge in organising the Haymarket defence, but the eight were found guilty and on November 11th1887 Albert Parsons and three of his comrades were hanged. So accustomed were the authorities to hounding Lucy that they arrested her on false suspicion of carrying a bomb as she tried in vain to see her husband one last time.

The infamous Haymarket Affair would outrage and unite America’s radicals. But for Lucy Parsons, bereavement, abject poverty, police harassment and yet more bereavement followed with the death of her 8-year-old daughter. She nevertheless remained indefatigably committed to her cause. In 1905 she co-founded the Industrial Workers of the World and, as editor of its periodical, The Liberator, provided a much-needed voice for poor women. Through her fiery speeches and popular columns in radical papers, she continued to challenge the ruling class and defend the oppressed until her dying day.

On 7th March 1942, Lucy Parsons died in a fire in her home at the age of 89. A threat even in death, her personal papers and books were seized by government authorities while the ashes of her gutted house still smouldered. Her achievements have sadly often been subordinated by her role as a Haymarket Martyr widow, but – from her roots as a victim of slavery and KKK terror, to the judicial murder of her husband and the U.S. government’s war on the IWW – she defied all obstacles thrown her way to become one of the most powerful agitators of her time. She never sought less than total revolution to eradicate the fundamentally flawed patriarchal system surrounding her.