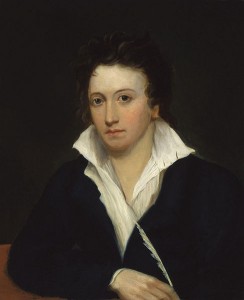 Today we lament the tragically early death of Percy Bysshe Shelley, drowned when his schooner sank in a sudden violent storm in the Gulf of La Spezia. He was twenty-nine years old. Ten days later, his body washed ashore and, in accordance with Italian quarantine laws, was burned on the beach in front of a small group of mourners including his friend and fellow Romantic, Lord Byron. As the flames subsided, the writer Edward Trelawny plucked the poet’s undamaged heart from the funeral pyre. Shelley’s famous widow, Mary, kept it for the rest of her days. In a final cosmic joke, the unfinished poem in which Shelley was engaged at the time of his death – The Triumph of Life – breaks off with the last line the young visionary would ever write: “Then what is Life?” He died before he could give us the answer.

So spectacularly dramatic was the death of this World Genius that his artistic legacy has been hijacked by the otherworldly realm of Myth. The unruly and often scandalous events of Shelley’s brief life equally hastened the sensationalising: expulsion from Oxford, disinheritance, passionate love affairs, elopement, reckless excursions, intense friendships with other remarkable poets, utopian idealism, experiments with free love, exile, ostracism. All conspired to create a legend that has oftentimes eclipsed his brilliance. The most neglected of all the great Romantics – dismissed during his lifetime and for decades afterwards as a tortured, ruffle-collared “beautiful but ineffectual angel” – Shelley’s legacy remains askew. Though recognised as one of the finest lyric poets in the English language, his best-known poems – Ode to the West Wind, To a Skylark, and his elegy to John Keats, Adonais – are in fact amongst his least representative. For Percy Bysshe Shelley was the most radical poet since Lucretius and one of the most revolutionary figures of his day.

The twelve turbulent years of Shelley’s adult life was a period of uninterrupted tyranny. And with astonishing feats of vision, intellect and imagination, the young Romantic gave poetic voice to the yearnings of the underclasses. In epics like Queen Mab, Prometheus Unbound, the Revolt of Islam and the Masque of Anarchy, he took to task the institutions of oppression – class, religion, education, the State – and, like a proto-Marx in rhyme, urged the British masses:

Rise like Lions after slumber
In unvanquishable number,
Shake your chains to earth like dew,
Which in sleep had fallen on you—
Ye are many—they are few.

Anarchist, feminist and utopian, Shelley’s thinking would inspire such radical luminaries as Karl Marx, Henry David Thoreau, Yeats, Oscar Wilde and Mahatma Gandhi. And nearly two centuries after his death, he remains a relevant, prescient consultant on any of the multifarious topics he addressed – from vegetarianism and nature to war and class division. “Poets are the unacknowledged legislators of the world,” Shelley asserted – and his poetry and ideas continue to reverberate with eternal truth. He was a peerless revolutionary poet. He was The One.

As Paul Foot wrote in Red Shelley, he should be read today by radicals of every hue: “Read him, learn him by heart and teach him to your children.”