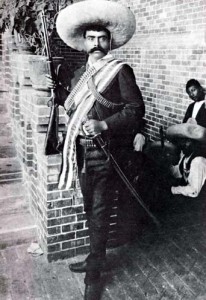 Today we lament the death of the great Mexican revolutionary, natural anarchist and prophet ­– Emiliano Zapata – tragically betrayed and ambushed on this day in 1919 by federal forces after an heroic 9-year struggle to bring self-reliance and autonomy to his beloved people of Morelos and to reject the very concept of Mexican nationalism as too geographically flawed to put into practice. Zapata refused ever to play a national role in the Mexican Revolution, encouraged his Zapatistas to wear white in defiance of Mexico’s history of violent militaristic regimes, dressed always as a dandy – decked out in powder-blue satins, always the largest sombreros, each item studiedly chosen to symbolise the ultra-civilian, the very antithesis of each and every other Mexican revolutionary leader. With 100 years of hindsight, none of the other Mexican revolutionary leaders – save of course for Pancho Villa – should even really be regarded as having been revolutionary at all. Zapata however was revolutionary throughout, and adhered so steadfastly to his dream of Morelos self-reliance that he must genuinely be considered worthy of the title ‘prophet’. Zapata was in no way faultless, but he was inspirational to an extraordinary degree – exhibiting several of those same local freedom-fighter characteristics that we see in the antics of Jesus Christ as told not through the eyes of Paul but through his Nazarene disciples. Tragically, it was Zapata’s insistence on representing only his own Morelos homeland that ultimately caused his assassination. For as the ever-changing political landscape shape-shifted around him, Zapata’s national-minded enemies nevertheless always regarded his Morelos homeland as one day theirs. That his refusal to become a national figure ultimately created Zapata’s downfall can hardly be disputed. But it is surely this stubborn refusal to divert his gaze from that glorious Morelos end-game that continues today to create freedom-fighters who bear his name. Like Jesus Christ, Emiliano Zapata achieved his position as a global figure only by acting extremely locally. His vision was sound, true and beautiful.