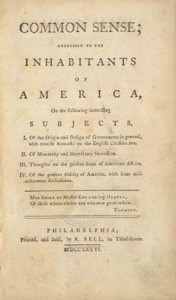 At the beginning of 1776 the American Revolution was well underway and growing in intensity with each passing week. The Battle of Bunker Hill in June ’75 had shaken the British army so badly they’d been on the back foot ever since. And by March of 1776 Washington’s advance on Boston would drive the bulk of that army into Canada. Of course, King George would respond with a lengthy military campaign and the War of Independence would continue for some years. In truth though, it was back between Bunker Hill and Boston that American independence became inevitable. Because it was on this day, January 10th back in 1776 that Thomas Paine published Common Sense.

It’s hard to overstate the impact this short book (a pamphlet really) had both on the leaders of the American Revolution and, more importantly, on the wider population. At the time there were barely two and a half million European settlers in the British colonies, yet within months Paine’s book had sold half a million copies. The majority of households had a copy and it was the subject of widespread discussion. It succeeded both in tapping into public sentiment and in giving that sentiment focus and direction. Five months later when Thomas Jefferson sat down with John Adams and Benjamin Franklin to write the Declaration of Independence, he publicly acknowledged Common Sense as being his chief inspiration.

Because what Paine offered, for the first time, was a clear and convincing description of an independent United States of America. Prior to January 1776 there’d been a revolutionary militia fighting against a king; but with the publication of Paine’s pamphlet that struggle became a national independence movement. And once that transformation occurred, it was just a matter of time.

Common Sense was primarily a call to arms. Thomas Paine was telling America why Britain’s continued ownership of the colonies was unjust and why they had a moral obligation to oppose it. Telling America that it was no longer made up of Dutch and Germans and English and Swedes all living in the British colonies… that now they were all Americans. Citizens of an independent United States. And he was telling America that with the resources of a continent behind it, it need fear no nation.

It’s a remarkable text that covers a lot of ground despite its low page count. To the modern reader it regularly lurches between the sublime and the ridiculous. On one hand for instance, the passages in Common Sense that discuss national debt are filled with the kind of long-term thinking that modern societies have completely lost, to their detriment. Those passages show just how far the US has drifted from the original blueprint dreamt by Paine and drafted by Jefferson. In fact, the idea of generating debt and expecting future generations to pay it back was among the foulest of crimes for Paine. It was…

… using posterity with the utmost cruelty; because it is leaving them the great work to do, and a debt upon their backs, from which they derive no advantage. Such a thought is unworthy a man of honor, and is the true characteristic of a narrow heart and a peddling politician.

And yet just before that perfectly sound principle, Paine denounces the institution of monarchy using two pages of bible quotes and a mild dose of anti-seminitism. The pamphlet contains the seed of the US military-industrial complex…

Our present numbers are so happily proportioned to our wants, that no man need be idle. The diminution of trade affords an army, and the necessities of an army create a new trade… alongside a heartfelt plea for religious tolerance… Suspicion is the companion of mean souls, and the bane of all good society. For myself I fully and conscientiously believe, that it is the will of the Almighty, that there should be diversity of religious opinions among us…

It’s a vision of a future America where Native Americans barely get a mention — and when they do it’s derogatory. A vision of an America isolated from the petty squabbles of the rest of the world but exerting influence through international trade. It shifts from the philosophical, the poetic, the positively esoteric, to the practical and specific without breaking stride…

O ye that love mankind! Ye that dare oppose, not only the tyranny, but the tyrant, stand forth! Every spot of the old world is overrun with oppression. Freedom hath been hunted round the globe. Asia, and Africa, have long expelled her. Europe regards her like a stranger, and England hath given her warning to depart. O! receive the fugitive, and prepare in time an asylum for mankind.

is followed by a cost-breakdown for the production and operation of different warships along with an outline plan for the formation of a United States navy. It veers from the liberal to the puritanical and back again, all the while using powerfully emotive language to reinforce a feeling of injustice in the contemporary reader.

Beyond his call to arms, Paine was offering the colonists a vision of a new nation. And somewhat remarkably, within a few months they’d collectively chosen to adopt it. Reading Common Sense today, one gets an overwhelming sense of just how far America has strayed from the original vision. And yet, one also cannot fail to recognise modern America within its pages. For better and for worse, the pamphlet Thomas Paine published was to exert a powerful influence over the country America became and the country it still is. For that reason, and for all its myriad faults and curiosities, it must surely be considered one of the most influential and revolutionary texts ever published.