10th July 1985 the Bombing of the Rainbow Warrior 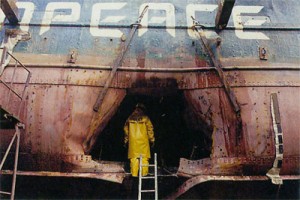 On July 10th 1985, French intelligence agents acting under direct orders of President François Miterrand bombed the Greenpeace Rainbow Warrior in Auckland harbour to prevent its protest voyage to the nuclear testing site of Moruroa in French Polynesia. The French denied, lied, and – after the truth emerged – rationalised that they’d intended only to disable the Rainbow Warrior while it was docked. But the French agents did not simply attach one explosive charge to its propeller as they might have. No. Two bombs were detonated, with no warning given either before or between the two explosions. The ship was manned by civilians on a well-publicised mission of hope and peace for the future of the human race. A Portuguese photographer aboard the Rainbow Warrior was murdered by the French government. His name was Fernando Pereira. He had a wife and two children. For New Zealand, a declared nuclear-free zone, the attack in its waters was little short of an act of war. After two of the French agents were arrested, tried and imprisoned, the French economically blackmailed its long-time ally with trade embargoes, while those two other Western imperialist possessors of nuclear weapons – the USA and UK – turned a blind eye. Appropriately codenamed Opération Satanique, the bombing of the Rainbow Warrior stands as one of the most cynical, arrogant and cowardly acts of state-sponsored terrorism.

While we lament the tragic death of Fernando Pereira and the sinking of the Rainbow Warrior – named in honour of a Cree Indian prophecy foretelling of a group of people from all nations calling themselves Warriors of the Rainbow who would band together to defend the Earth from human poison – this woeful anniversary is an opportunity to also bemoan France’s little-known environmental vandalism and crimes against humanity during its thirty years of nuclear testing. Between 1966 and 1996, the French military conducted over 200 nuclear tests at Mururoa and Fangataufa atolls in the Pacific, forty of them atmospheric. Throughout that entire period, French authorities steadfastly and officially denied that these tests caused any significant environmental or human damage. In August 2006, an official report by the French government confirmed the link between nuclear testing and an increase in the cases of cancer in the French-occupied Polynesian population. A massive crack in the atoll is still guarded by French Forces to inhibit independent assessments of environmental damage in the area.