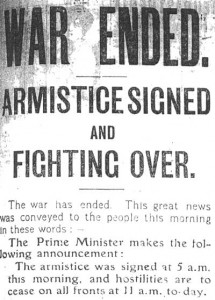 “If any question why we died, tell them because our fathers lied” – R Kipling

Exactly 100 years ago today, the signing of the Armistice in a railway carriage in France’s Compiegne Forest, by the Allied Commander-in-Chief Marshall Foch and Germany’s representative Matthias Erzberger, signaled the end of World War One and the complete defeat of Germany, whose puzzled armies – returning from their French trenches – discovered a bankrupt homeland facing starvation through Allied blockades. Rejoicing in Britain was also muted due to the destruction of whole communities of young men, who’d often enlisted – a whole village at a time – then given their lives in the fury and insanity of battle without even glimpsing an enemy soldier. For this war-to-end-all-wars was above all a scientific war, a war fought with maps by commanders often several miles behind their own troops, pitting new and untried technologies such as mustard gas and tanks, against an unsuspecting enemy but often resulting – through carelessness or sheer bloody-mindedness – in death through friendly fire. Britain’s first deployment of mustard gas killed hundreds of our own troops merely because the commanders refused to postpone the attack until the wind was blowing in the Germans’ direction. Passing the site of the infamous Battle of Passchendaele, one British commander broke down in tears, unable to believe that they’d insisted men fight in such conditions. Such was the gulf between commanders and their soldiers on the Front.

But the greatest tragedy of World War One is that the Armistice was – with hindsight – the end of that war in name only. For the brooding Germans were left to question how on earth they could have been considered ‘the defeated’ whilst still fighting on French soil. Exhausted from the struggle they undoubtedly felt. But a beaten people? No. Nevertheless, the victorious Allies immediately demanded the payment of hefty war reparations from the already bankrupt Germans, so many reparations that tremendous resentment began to build in the German population. What the German public would never be told was that the army commander-in-chief General Ludendorff was to blame for having called the ceasefire that ended the war, having been suffering a temporary crisis of confidence. When Ludendorff learned how poor were the Peace Terms being offered by the Allies, he was both incensed and inspired to resume hostilities. By that time, however, his armies had lost the will to fight and had even begun to return home. At no time, however, would Ludendorff allow the army to take the blame publically for Germany’s defeat. To the new liberal government, therefore, fell the onerous task of signing the surrender papers. So to the German public, it was on the heads of these liberal politicians that the blame for the surrender was heaped. To future generations these politicians became disparaged as ‘The November Criminals’, betrayers of Germany. And it would be this fudged, scheming and somehow illegitimate conclusion to Germany’s role in World War One which would create the festering and brooding conditions of the 1920s that would facilitate the political rise of Adolf Hitler.