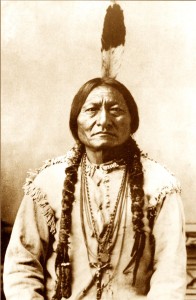 “I wish it to be remembered that I was the last man of my tribe to surrender my rifle.” – Sitting Bull

Today we lament the death of Sitting Bull – arguably the most famous-ever Native American – murdered by Indian “police” during a bungled effort to arrest the legendary 59-year-old Sioux chief. Five years earlier, Sitting Bull had received a vision that he would die at the hands of his own exploited people, as had his fellow heroic resistor, Crazy Horse, with whom Sitting Bull had so famously united to defeat Custer at the Battle of the Little Bighorn in 1876. But Crazy Horse was murdered just fifteen months after what was to be the last great Indian victory, and Sitting Bull would live for another fourteen protracted years – during which time he bore witness to the systematic destruction of the Sioux traditions and desecration of their sacred lands in the Black Hills of South Dakota. These last years of Sitting Bull’s life – following his surrender to the U.S. Army after cold and hunger forced him and his band to return from exile in Canada – saw this great shaman and inaugurated leader of all the Sioux tribes detained for nearly two years as a prisoner of war, confined to a small allotment within the Standing Rock reservation where he was denied the right to hunt, embroiled in a constant feud with U.S. Indian agent James McLaughlin, and even reduced to a “feature attraction” in Buffalo Bill’s Wild West exhibition tour. Yet despite such dishonours enforced upon him in this period of extreme transition as the Great Plains tribes were finally pacified, Sitting Bull remained to his death the white man’s boldest, strongest and most stubborn opponent. He battled the land agreements of 1888 and 1889, which demanded the return of half the Great Sioux Reservation for white settlement and divided the rest into six separate reservations; when the federal government exploited Sioux factionalism amongst the “government-appointed chiefs” in order to obtain the necessary signatures for this new so-called treaty, Sitting Bull alone refused to sign; and, somehow, he remained a beacon of hope amongst his increasingly hopeless people.

Against reservation policy, the Sioux continued to recognise and revere Sitting Bull as their leader. Indeed, so fearful was McLaughlin of the great chief’s support for the ill-fated Ghost Dance – the religious movement that swept through the Great Plains tribes throughout 1890, carrying the promise of an end to White expansionism and the return of the nearly-extinct buffalo – that he ordered Sitting Bull’s arrest under the pretext of a suspected uprising. And so, at 5.30am on 15th December 1890, McLaughlin dispatched thirty-nine tribal policemen who surrounded Sitting Bull’s cabin. A group of Ghost Dancers, determined to protect their leader, opened fire. Sitting Bull was killed in the melee, along with 15 others. Buried in a corner of the Fort Yates military cemetery, even in death the great chief was deemed a threat. His relatives were refused permission to hold a public burial. His body was desecrated by the white man with quicklime and acid to prevent the taking of relics.

It was a tragically senseless death for this holy man who – as a sash-wearer in the Brave Heart soldier society of the Hunkpapa – had sacrificed 100 pieces of flesh from his arm during his legendary sun-dance ceremony that preceded Little Bighorn and vowed to give his life in defense of his people. But was it, as has so often been said, an ignominious death? By his own judgment, Sitting Bull died for that which he loved: “Is it wrong for me to love my own? Is it wicked for me because my skin is red? Because I am Sioux? Because I was born where my father lived? Because I would die for my people and my country?”

The murder of Sitting Bull would trigger the Wounded Knee Massacre just two weeks later, marking the end of the Indian Wars and the total subjugation of the Lakota tribes.