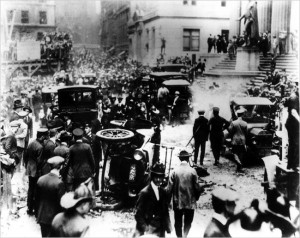 On this day in 1920, a bedraggled horse-drawn wagon made its way along Wall Street in Lower Manhattan – which had recently eclipsed London as the financial centre of the world – and stopped directly in front of its then-most powerful totem, the J.P. Morgan building. At the stroke of noon, the driver abandoned the wagon and anonymously slipped away just as the endless stream of office workers emerged from the surrounding buildings to begin their lunch hour. Moments later, the wagon exploded. A powerful blast of shrapnel and broken glass sliced into workers indoors and out, killing thirty-nine and injuring hundreds of others, in what was the first symbolic terrorist attack on American capitalism and power. The subsequent and ultimately fruitless investigation to find the perpetrator would – yet again – expose America’s deep-rooted prejudices against ethnic minorities, as anyone possessing the wrong accent became a suspect.

The Washington Post declared the incident an “act of war.” Impervious to the lack of any suspects, or even any credible claim for responsibility, the newspaper nevertheless did not hesitate to name the enemy: “The bomb outrage in New York emphasizes the extent to which the alien scum from the cesspools and sewers of the Old World has polluted the clear spring of American democracy.” Without any supportive evidence, this was a dicey statement which served only to further fuel the zeitgeist of post-World War I America in the grip of its Red Scare and ongoing labour disputes. Thus it was, with an amnesiatic shamelessness, that A Nation of Immigrants proceeded to blame the attack firmly and indiscriminately on its most recent arrivals. Fear of further violence intensified the so-called Palmer Raids – the gigantic Government-backed human dragnet, targeting Italians, Russians, Germans and Jews suspected of harbouring radical ideas. In the ensuing hysteria, thousands of ethnic-minority citizens were detained – 10,000 would ultimately be deported – in the name of “national security”, even though there was no evidence to link most of them to the terror plot.

Meanwhile, Wall Street – which, before the attack, had been viewed suspiciously by many for its unchecked growth of power – emerged as a new symbol of patriotism. Stock trading resumed the next day, and the continuing financial boom came to represent an act of defiance against terrorism. Anyone who dared voice concerns about capitalism or the investigation into the bombing was denounced as unpatriotic, effectively smothering any public debate on the matter. The attack also served to consolidate the position of the Bureau of Investigation (which, in 1933, was re-named the Federal Bureau of Investigation). Previous public concerns and criticism for a federal secret police evaporated as fear of radicalism spread.

Until the very recent addition of a memorial tourist plaque, the site of one of America’s deadliest attacks was only recognisable by the pockmarked façade of the J.P. Morgan building. When asked if they would ever consider repairing the superficial scars, the response by a J.P. Morgan partner provided a telling legacy to this little-known event: “Replacing those great blocks would be inordinately and unnecessarily expensive.”