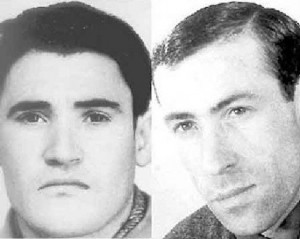 On this day in 1963, two young Spanish anarchists were executed by General Franco’s obscene regime for a Passport Office bombing of which they had no knowledge, while the real perpetrators slipped quietly away. Despite the absence of any evidence of their involvement, Francisco Granados (27) and Joaquin Data Martinez Delgado (29) – both members of the anti-Franco movement called the Iberian Federation of Libertarian Youth – were interrogated, brutally tortured, tried behind closed doors and executed by garotte at Franco’s notorious Carabanchel Prison, and all of this in just eighteen days after having been arrested.

For many, these unfortunates were but two more victims of an unrestrained and merciless tyrant estimated to have executed almost two million non-combatants between 1939-75, during his arduous near four-decade-long reign of terror. But what separated this grotesque event from the rest of Franco’s merciless pogroms against his own people was that it took place not at the chaotic post-Civil War beginning of his ‘reign’, but twenty-four grueling years into his rule, and during this cynical tyrant’s attempt to pass off his regime as ‘respectable’ to the rest of the Western World. For, as a resurgent wave of underground resistance began throughout 1963 to rise up from the ashes of violent repression, General Franco openly recommenced his policy of institutionalised revenge and intent to eradicate from Spain all democrats, liberals, socialists and – above all others – his most-despised enemies from the war, the communists and anarchists.

More shocking still, however, is that the fall-out from Franco’s methods has persisted right up to the present day. For when, thirty-five years later, in 1998, two anarchists Antonio Martin and Sergio Hernandez confessed that they had in fact planted the bombs, the present day Spanish authorities chose not to take the opportunity to draw a line under that dreadful Franco period, but shocked the aggrieved families of the innocents by upholding the 1963 verdict, adjudging it to have been delivered in accordance with ‘the prevailing legal disposition’. That the families of Granados and Delgado – knowing their relatives’ innocence – must continue their battle to clear their loved ones’ names shows just how hollow have been Spain’s attempts to eradicate the enduring infamy of General Francisco Franco.

This entry was posted in Anarchists, Dissent. Bookmark the permalink.

One Response to 17th August 1963 – the Execution of Delgado & Granados