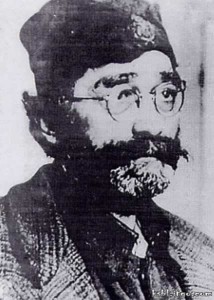 Draza Mihailovic: Fooled the Axis, fooled the Allies, but ultimately fooled himself

Today, we make brief note of the execution 70 years ago of the notorious Serbian Chetnik leader – General Dragoljub ‘Draža’ Mihailović – for war crimes and collaboration with the Nazis and Italians during the Second World War.  Rejected at the end by all his family save his wife and forgotten in an unmarked grave, the tragic demise of ‘Uncle Draža’ would have been unimaginable just five years previously, when – claiming the title ‘The Yugoslav Army in the Fatherland’ for his Chetnik guerilla force – Mihailović ‘s widely-reported will o’the wisp behaviour had led General De Gaulle to call him the ‘pure hero’ and 20th Century Fox had lauded Mihailović in the Hollywood propaganda movie ‘Chetniks! The Fighting Guerillas’. But all the while handsome Hollywood 30-ish hunk Philip Dorn was, on the big screen, portraying the 50-plus specky beardo as the unequivocal and unconditional Balkan hero, thousands of miles away in the field of battle, General Mihailović was in truth so afraid to act against the Germans for fear of reprisals against the Serbian civilian population that, after much prevarication, he even preferred to turn his guns on Tito’s Partisans, for fear that their anti-Nazi behaviour might ignite more German atrocities. From the Zorro character that had inspired Hollywood moguls, General Mihailović gradually, inexorably performed a 180’ volte face and even began to collaborate with the Nazis, taking money from them while still collecting supplies and weaponry from the Allies. And there could be only one cruel and conclusive final outcome for this one-time national hero once Tito’s Partisans came to power after the war: summary execution. Perhaps grasping the enormous tragedy of his failed opportunities, Draža Mihailović declared in his final statement before execution:

“I wanted much; I began much; but the gale of the world carried away me and my work.”

4 Responses to 17th July 1946 – the Execution of Draza Mihailovic