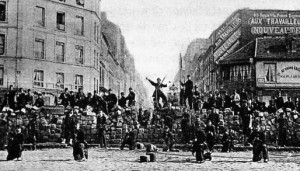 “Storming Heaven”: The barricades at Montmartre

Today marks the anniversary of the formation of the Paris Commune – the first successful seizure of power by the working class. Facing Prussian invasion forces on one side and French troops mobilised against its own citizens on the other, the descendents of the sans-culottes of 1792 rose up to take power of Paris and establish a new kind of autonomous government. Schooled in the ideologies of Proudhon and Blanqui, the Communards decreed separation of church and state, improved workers’ rights, organised and provided public services, established co-operatives, implemented educational reforms, and the strong feminist movement within the Commune even negotiated the right for women to vote. One of the epochal events in social history, the Paris Commune would inform the next fifty years as anarchists and Marxists obsessed and argued over its successes and failures. In his 1895 study “The Commune of Paris: How the Commune failed to realize its true aim and yet set that aim before the world,” Peter Kropotkin wrote:

Why is the idea represented by the Commune of Paris so attractive to the workers of every land, of every nationality? The answer is easy. The revolution of 1871 was above all a popular one. It was made by the people themselves, it sprang spontaneously from the midst of the mass, and it was among the great masses of the people that it found its defenders, its heroes, its martyrs. It is just because it was so thoroughly “low” that the middle class can never forgive it. And at the same time its moving spirit was the idea of a social revolution; vague certainly, perhaps unconscious, but still the effort to obtain at last, after the struggle of many centuries, true freedom, true equality for all men. It was the revolution of the lowest of the people marching forward to conquer their rights.

This extraordinary explosion of democracy, freedom and co-operation – “the glorious harbinger of a new society,” as Karl Marx hailed it  – would end in utter tragedy. But while the monumentally significant tale of the Paris Commune will unfold in the coming months here at On This Deity, let’s pause for a moment to recall and celebrate its beginning…

The events which led to the revolutionary formation of the Paris Commune began when France suffered a crushing defeat in the Franco-Prussian War in September 1870. As the Empire fell, a Third Republic was proclaimed and a new provisional government – the (so-called) Government of National Defence – was established, ostensibly to continue the war against the Prussians. This rotten new bourgeois regime would soon prove to be even deadlier than the outgoing empirical tyrants and showed its lack of grit almost immediately by capitulating to Prussia’s unreasonable terms of peace. Paris, however, remained defiant and refused to surrender. The Parisian National Guard, aided by the poor and oppressed masses, mounted a defence of the city – and, by late September, Paris was under siege that lasted for five gruelling months. When the head of the provisional government, the deplorable Adolphe Thiers, negotiated an armistice with the Prussians in January 1871, Parisians once again defied surrender and the city’s National Guard continued to mobilise.

On 18th March 1871, Thiers sent his regular army to Paris to regain control of the arms of the National Guard – including some 400 cannon. When the government troops arrived in Montmartre, they were surrounded by angry local women and children who beseeched them not to fire upon their own people. As the National Guards marched past, sounding their drums to rouse the population to resistance, General Claude Martin Lecomte three times gave the order to fire. Thiers’ troops, however, refused – and instead turned their guns on their own generals. Other army units joined the rebellion which spread so quickly that Thiers ordered an immediate evacuation of Paris by as many of the regular forces as would obey.

By three o’clock in the afternoon, one of the world’s greatest cities was in the hands of armed workers.