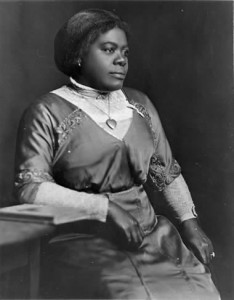 In that grim 100-year period between the end of the American Civil War and the onset of the Civil Rights movement, the only thing more challenging than being an African American was the double whammy of being both black and female. Today we recall one of the great heroines of those dark days – the civil rights activist, educational pioneer, social visionary and “First Lady of the Struggle” – Mary McLeod Bethune.

The fifteenth of seventeen children of former slaves, Mary’s commitment to her cause would take her from the cotton fields of South Carolina all the way to the White House where she advised four different presidents on the African American crisis. Renowned for her cunning diplomacy, she forged useful alliances with influential whites – but, unlike many of her male contemporaries, she succeeded in doing so without ever compromising the principles of her cause. “If we accept and acquiesce in the face of discrimination,” she insisted, “we accept the responsibility ourselves and allow those responsible to salve their conscience by believing that they have our acceptance and concurrence.”

And while her black male counter-parts engaged in heated debates about accommodationist versus militant tactics, this 5’4” spitfire – who walked with a cane because it gave her “swank” – was quietly busy getting on with the task at hand. In 1904, after raising the necessary $1.50 capital by selling sandwiches to railroad workers, Mary opened the first school in Florida for black girls. Starting out with just five students, within forty years she guided the Literary and Industrial Training School for Negro Girls all the way to university status as the Bethune-Cookman College. But she didn’t stop there in her quest to emancipate her people. Mary went on to found a national organisation for the development of black youth. She risked lynching by the KKK to personally register the names of hundreds of black female voters. Almost single-handedly, she raised black women from their social and political invisibility to a viable presence in national affairs. Mary understood that education alone was the key to liberation from the oppressive social, economic and political shackles of White America. And, as Franklin D. Roosevelt’s special advisor in his so-called “Black Cabinet,” she succeeded where countless others had failed in securing substantial and much-needed cash injections for African American education and vocational training. In addition to her presidential advisory appointments, Mary served on the executive committees of several African American national organisations and founded the National Council of Negro Women.

For over four decades, she worked tirelessly, resolutely and fruitfully for the advancement of African Americans. So where is her name in the history books?

If remembered at all, the legacy of Mary McLeod Bethune – once considered “the most influential black woman in America” – has been relegated to that traditionally-acceptable female role of “great educator.” A memorial sculpture in Washington D.C. shows her not as the first black woman to serve as a Presidential appointee, but handing a book to children. There is no comprehensive Bethune biography; the introduction to a compendium of her writings suggests that she is too “multi-faceted” and defies “sociological categories and stereotypes” to render assessment.