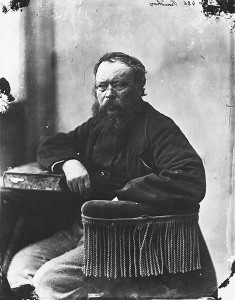 Let us cast our mind back to this day in 1865 to remember the death (at the age of 56) and celebrate the life of the world’s first anarchist. Actually, it’s probably stretching things a little to describe Pierre-Joseph Proudhon in such terms; but he was the first to use the term “anarchism” (from the Greek, meaning “without rule”) in the modern sense and the first to self-apply the label.

Proudhon was, and continues to be, a controversial figure. Sometimes described as the father of anarchist thought, his books and letters were a major influence on 19th-century political philosophy. At the same time, Proudhon has also been accused of providing the template for 20th-century fascism, though such charges are difficult to reconcile with the majority of his published work.

Born in France, close to the Swiss border, Proudhon’s childhood was divided between working on local farms and educating himself in the classics. By the time he first entered formal education at the age of 16, he had already taught himself Ancient Greek and Latin and was extremely well-read by any standards let alone those of a poor, self-educated working-class boy. He spent three years at his local college where he added Hebrew and German to his lexicon and took a particular interest in theology. An interest that was to inform his future work in often-strange ways.

Indeed there is much about Proudhon and his work that could be described as “strange” or paradoxical and while the slings and arrows of his harshest critics are often unjustified, there’s little doubt that his prolific letter and essay-writing has resulted in what today we might charitably describe as a lack of editorial control.

The bulk of his writing takes an unambiguously anti-militant stance. Yet the diligent scholar of his work can unearth calls to arms and the proposal that all men should serve a period of military service. The bulk of his writing talks about the Brotherhood of Men, the equality of all regardless of race, creed or colour. Yet on a personal level Proudhon was clearly infected by the rampant anti-Semitism of the time and there is a powerful streak of nationalism running through many of his letters. The bulk of his writing champions atheism and the rejection of Church dogma. Yet his own religious beliefs are ambiguous to say the least and it’s not unusual to come across biblical quotes, or references to God, in his work.

There can be few political philosophers of note who have so ably demonstrated Oscar Wilde’s maxim that Consistency is the last refuge of the unimaginative. And whatever else one may accuse Proudhon of being, “unimaginative” is not a word that springs to mind.

After college Proudhon worked as a proof-reader for a printer of foreign language books until his interest in revolutionary politics compelled him to begin writing his own books rather than printing the works of others. He made an instant impact with his first book, published in 1840, entitled What is Property? His answer to that question has since become one of the central slogans of anarchism… “Property is theft”. It was a stance that made him unpopular with the French establishment, and even in those revolutionary times Proudhon soon found himself on trial for sedition (though he was ultimately acquitted).

By the mid-1840s he had moved to Paris and set up his own printing press. Becoming a celebrated figure in revolutionary politics — not just in France but across Europe — he’d struck up a correspondence with Karl Marx soon after Marx had read his second book, Warning to Proprietors, in which Proudhon claimed there was no real distinction between political and economic power, or between those who exercised them.

But it was with his third book, The System of Economic Contradictions or The Philosophy of Poverty that Proudhon’s anarchist philosophy finally came of age. Published in 1847, it signalled the end of his friendship with Marx who composed a biting rebuttal, The Poverty of Philosophy, and denounced Proudhon as a “Utopian Socialist” and, as such, incompatible with the “Scientific Socialism” that he and Engels were working towards. This split was not merely a personal difference of opinion but was felt in labour unions and revolutionary organisations around the world as well as in the International Working Men’s Association which fractured into anarchist and communist groups as a direct result. And although Proudhon would continue to call himself a socialist and a mutualist, as well as an anarchist, there’s no doubt that his split with Marx also saw him leave behind mainstream socialism and take a more radical path.

That said, while he was an active participant in the Paris revolutions of 1848, Proudhon was far from an enthusiastic supporter of those who led them. He became impatient with their focus on political reform at the expense of economic reform and despite helping to compose The First Republican Proclamation which would become the inspiration and manifesto of the February 1848 uprising, he dismissed much of the French revolutionary movement as being more concerned with the individuals who held power than with the actual structures of power.

Manning the barricades and being involved in the fighting, Proudhon soon developed deep misgivings about the use of force to achieve political ends. “Whoever lays his hand on me to govern me,” he would write in 1849, “is a usurper and tyrant, and I declare him my enemy.” And he applied that maxim to revolutionary organisations just as he did to the forces of the establishment. He sincerely believed that economic revolution without bloodshed was possible through the self-organisation of workers into local co-operatives along with the establishment of a revolutionary not-for-profit banking system which would provide interest-free credit and levy only such charges as were required to cover administration costs. He believed that capitalism would wither and die without the need for violence should such a banking system, in tandem with a widespread co-operative movement, become established.

I believe we have no need of [a revolution] in order to succeed; and that consequently we should not put forward ‘revolutionary action’ as a means of social reform, because that pretended means would simply be an appeal to force, to arbitrariness, in brief, a contradiction.

… to turn the theory of Property against Property in such a way as to engender what you German socialists call ‘community’ and what I will limit myself for the moment to calling ‘liberty’ or ‘equality’. […] I would therefore prefer to burn Property by a slow fire, rather than give it new strength by making a St Bartholomew’s night of the proprietors.

Despite his best efforts, however, he was unable to establish a national bank that conformed to the anarchist principles he had outlined; and while numerous workers collectives and co-operatives flourished in France and elsewhere — directly inspired by his writing — the movement never gained the critical mass necessary to make a significant dent in the rising power of the capitalist class.

Nonetheless Proudhon remains a hugely influential figure in the history of revolutionary thought. His friendship with Marx and Bakunin was to leave an indelible mark on the philosophies of both men (despite the subsequent split with Marx) and his ideas about workers co-ops are still very much alive today as is his banking model, which has mutated into the modern Credit Union system.

Proudhon died in Paris in 1865, disappointed that his non-violent economic revolution did not appear to be making the sort of progress he believed not merely desirable, but inevitable. Like Marx, he was convinced that capitalism would be but a brief way station on the road to a socialist society. Nonetheless, he remained hopeful that the world would eventually come to its senses and recognise the deep truth within those three words… Property is theft.