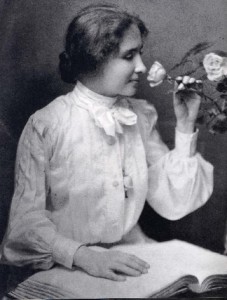 Helen Keller: A woman of vision

Today we pay tribute to one of the twentieth century’s most potent symbols of courage and fortitude, the legendary Helen Keller. Rendered deaf and blind at nineteen months as a result of what was probably scarlet fever, the extraordinary story of her extraordinary communication breakthrough at the age of seven – with the help of her teacher Anne Sullivan – catapulted Helen to international fame. The “wa-wa-water” moment – re-enacted time and time again in motion pictures, plays, dramatisations and storybooks – is as iconic to American schoolchildren as George Washington chopping down the cherry tree. Defying her disabilities, Helen went on to graduate from Radcliffe, America’s most prestigious university for women, becoming the first deaf-blind person to earn a Bachelor of Arts degree. A gifted and prolific writer, she authored twelve books and numerous articles and essays for national papers and literary journals. And, as a world ambassador for the American Federation for the Blind, no one did more to raise awareness of the plight of others with disabilities. A recipient of the Presidential Medal of Freedom, elected to the National Women’s Hall of Fame, her image honoured on a postage stamp and the Alabama state quarter, Helen Keller is an unmitigated American Folk Hero.

But what the endless accolades and history books almost always fail to mention is that Helen Keller was a militant radical activist. Her views mirrored the likes of the era’s most notorious dissidents – Emma Goldman and Eugene Debs – who were respectively deported and imprisoned for ten years. “I don’t give a damn about semi-radicals,” she famously proclaimed; indeed, she leaned so far to the left that the FBI kept a file on her for un-American activities. She was co-founder of the American Civil Liberties Union; a lifelong socialist who campaigned for Eugene Debs’ presidential candidacy; a member of the revolutionary Industrial Workers of the World; a suffragist and crusader for birth control; an anti-fascist (the Nazis publicly burned her books); and a pacifist, who condemned America’s imperialistic motives in both world wars. Having benefited from a privileged background, Helen recognised the social injustices facing those denied the same opportunities – and blamed industrialism and capitalism as the root of poverty and disability-inducing diseases. Her anti-capitalist and pro-worker stance was such that at the 1919 Hollywood premiere of a silent film about her own life, she refused to cross an Actors Equity Union picket line. Instead, she joined the striking workers on their march.

In her lifetime, Helen Keller was one of the most recognisable women in the world, and those who flocked to bask in the radiance of her fame were positively scandalised by her beliefs. After publicly supporting the National Association for the Advancement of Colored People, admiring the Russian Revolution, and fearlessly lambasting the powerful John D Rockefeller for his role in the Ludlow Mine Massacre (“Mr Rockefeller is a monster of capitalism”), Helen’s radicalism became a source of extreme embarrassment to those who required her to be true to The Myth in order that they might gain. In her own words:

“So long as I confine my activities to social service and the blind, they compliment me extravagantly, calling me ‘archpriestess of the sightless’, ‘wonder woman’, and ‘a modern miracle’ … But when it comes to a discussion of poverty, and I maintain that it is the result of wrong economics – that the industrial system under which we live is at the root of much of the physical deafness and blindness in the world – that is a different matter!”

And so the woman who had captured the world’s imagination with her courageous struggle to find her voice became the victim of a silencing campaign. The FBI began to monitor her activities, even while the State Department was benefiting from her celebrity as an unofficial ambassador. The American Foundation for the Blind, on whom Helen was financially reliant, demanded that she maintain an apolitical public stance. And her beliefs were systematically airbrushed out of all “official” accounts of her story. “My cause will emerge from the trenches stronger than it ever was,” Helen defiantly declared.  “Under the obvious battle waging, there is an invisible battle for the freedom of man.”

Yes, she overcame unimaginable odds to break through from the darkness, and her story will rightly continue to awe and inspire future generations. But the neutralisation of Helen Keller’s beliefs belies an equally important aspect to her legacy: she heard things that most close their ears to, and saw things that most turn a blind eye to.