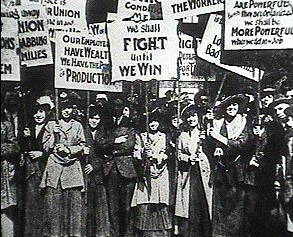 Protesting for the 8-hour work day

Today, May Day, marks the international celebration of the social and economic achievements of the labour movement. Except in the United States. Yet it is from the New World itself that May Day received its inspiration. On 1st May 1886, hundreds of thousands of workers across America went on general strike in demand of an 8-hour work day. In these still-early years of industrialisation, labourers – some as young as nine years old – were expected to toil for up to 16 hours a day, six days a week, in unsafe, unsanitary and completely unregulated conditions. Out of nothing less than desperation, workers adopted social reformer Robert Owen’s bold idea for an 8-hour day: “Eight hours’ labour, Eight hours’ recreation, Eight hours’ rest”.

Chicago was the epicentre of America’s labour movement. On the eve of the planned protest, 50,000 were already on strike. 30,000 more swelled their ranks the next day, bringing most of the city’s manufacturing to a standstill. Although fears of class conflict gripped the city, on the morning of 1st May 1886, Albert Parsons – head of the Chicago Knights of Labor – and his wife Lucy led nearly 100,000 peaceful protestors down Michigan Avenue in what is regarded as the first modern May Day Parade.

By 4th May, however, Chicago would explode in violence – and the ensuing shockwaves would be felt for years.

For radicals and trade unionists everywhere, these events would become a worldwide symbol of the stark inequality and injustice of the capitalist system. While America eventually settled on a random day in September to commemorate “the dignity” of workers with Labor Day, in 1890 the founding congress of the Second International voted to make May 1st a demonstration in solidarity with the Chicago labourers. Beyond the isolated shores of the United States, May Day has been the day of workers’ demonstrations and celebrations ever since.

Watch this space as the full, incendiary story of Chicago’s May Day unfolds…