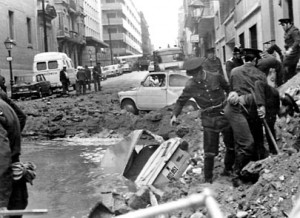 “One more pothole, one less asshole”

On this day in 1973, Spain moved a significant step closer to liberation from its protracted state of fascistic tyranny when General Francisco Franco’s named political successor – the recently appointed prime minister, Luis Carrero Blanco, otherwise known as “the Ogre” – was assassinated by the Basque separatist organisation, ETA.

“Operation Ogre”, as the meticulously planned plot was called, had begun some eight weeks previously when two men posing as sculptors rented a basement room from which they dug a tunnel until reaching the street where the Ogre’s car passed, without fail, every morning after attendeding Mass. At 9.45am on 20th December 1973, as Carrero’s Blanco’s Dodge 3700 made its way from Madrid’s San Francisco de Borja church, 165 lbs of dynamite exploded directly underneath it – catapulting the vehicle over the five-storey church and onto a second-floor balcony on the other side of the street. This massive trajectory gave rise to the slogan, “Up Franco! Higher than Carrero Blanco!” and the 35-foot hole in the street generated sniggers of “one more pothole, one less asshole.” For far from receiving condemnation, this assassination was widely applauded throughout Spain by a wearied people eager to be rid at last of an unrestrained and merciless regime estimated to have executed almost two million non-combatants during General Francisco Franco’s arduous near four-decade-long reign of terror.

As 1973 wound down, Franco was still governing Spain with an iron hand. Opposition parties remained forbidden, labour movements were repressed and dissenters were mercilessly hunted down and executed. The tyrant’s health, however, was failing and the continuity and preservation of the regime became his obsessive priority. Carrero Blanco was the only man who had Franco’s trust, enough authority to assume political leadership, keep Francoism alive and ensure that the successor of chief-of-state – Prince Juan Carlos – did not fall prey to liberal ideas. “Politics for me consists of total loyalty to El Caudillo [Franco],” Carrero Blanco the sycophant proudly proclaimed. “My loyalty to his person and to his work is total, without a shadow of any personal conditions or a trace of mental reservation.” Upon his appointment as prime minister – with Franco retaining ultimate authority – Carrero Blanco promptly replaced all officials believed to be even slightly forward-looking with ironclad Falangists, and continued to ruthlessly persecute suspected enemies of the state. For the embattled clandestine members of ETA, this puppet whom the Spanish oligarchy was counting on to assure a transition to “Francoism without Franco” was an even more vital target than the ailing 81-year-old Generalissimo. The Ogre had recently ordered the execution of five of ETA’s political comrades, and had overseen the arrest of ten other high-profile dissidents whose highly-publicised and much-protested trial was to begin 15 minutes after Carrero Blanco’s deliberately-timed assassination.

The assassination of Carrero Blanco – on course to become the most powerful figure in Spain – generated tremendous political reverberations. But no one was more shocked than Franco himself; the tyrant’s carefully laid plans for a smooth ideological transition of power had landed tits-up on a second-floor balcony. Another Franco acolyte – Carlos Arias Navarro – was swiftly appointed Prime Minister, and in his first speech to the Cortes in February 1974, promised liberalising reforms including the right to form political associations. Though Navarro was denounced by hardliners within the regime, the transition of power from Franco had been successfully thwarted. And the transition from Fascism to democracy had begun.