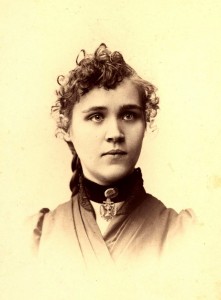 Today we pay tribute to an extraordinary frontierswoman and freethinker, Voltairine de Cleyre, who on this day in 1912 died as she had lived: “a free spirit, an Anarchist, owing no allegiance to rulers, heavenly or earthly.”

A leading luminary in the golden age of anarchism – indeed, Emma Goldman called her “the most gifted and brilliant anarchist woman America ever produced” – this talented poet and prose writer (presciently named after Voltaire) possessed an uncanny ability to beautify her radical, unflinching ideas, lending a much-needed “feminine touch” to an overtly extreme movement. The aesthetic appeal of her oeuvre – including such still-relevant essays as Direct Action, Anarchism and American Traditions and The Dominant Idea – contributed much to educating others of an oft-misunderstood ideal.

But behind the surface of this fair-faced utopian poetess was the most advanced and uncompromising anarchist-feminist of her era. At a time when the mainstream women’s movement was asking for little more than the right to vote, Voltairine de Cleyre was calling for wholesale emancipation from the root up through transformation of the fundamental patriarchal structures of church, state, economics and class.

It was Voltairine who pioneered feminist theory on economic independence for women; autonomy inside and outside marriage; the impact of oppression on women’s social status, economic status, and consciousness; women’s ownership of their own bodies; and the role of the church and state in oppressing women:

Let every woman ask herself: Why am I the slave of Man? Why is my brain said not to be equal of his brain? Why is my work not paid equally with his? Why must my body be controlled by my husband? Why may he take my children away from me? Will them away while yet unborn? Let every woman ask … There are two reasons why, and these are ultimately reducible to a single principle – the authoritarian supreme power GOD-idea, and its two instruments – the Church – that is, the priests – and the State – that is, the legislators…These two things, the mind domination of the Church and the body domination of the State, are the causes of Sex Slavery.

No one – male or female – had ever touched on such a wide range of issues that constitute women’s oppression or integrated them so coherently into a social and economic framework. Voltairine’s ideas would anticipate many of the tenets of the second wave of feminism by more than a half a century, and continue to challenge the notion that the vote alone could emancipate women. Women could look only to themselves for change, declared Voltairine. Not men or the state.

I never expect men to give us liberty. No, Women, we are not worth it, until we take it … By insisting on a new code of ethics founded on the law of equal freedom: a code recognising the complete individuality of woman. By making rebels wherever we can. By ourselves living our beliefs … We are revolutionists. And we shall use propaganda by speech, deed, and most of all life – being what we teach.

Is there a twenty-first-century woman of independent mind and spirit who could not fail but to be moved by such stirring words?

She blazed a brief but indelible trail in her 45 years. For as long as sexism and patriarchy exist, so too will the relevance of Voltairine de Cleyre endure.