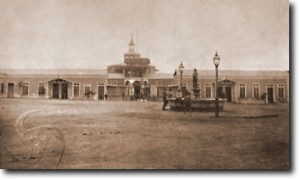 The Santa Maria School in Iquique, Chile, circa 1907

On this day 1907 in the city of Iquique, some 3000 striking workers and their families were brutally massacred by the Chilean army on government orders. This state-sanctioned crime was subsequently suppressed for nearly one hundred years; if not for the testimony of witnesses passed down to new generations through oral tradition and an art form unique to Latin America, this tragic episode might never have come to light. But as Chile underwent a Socialist revolution in the decades following World War II, the victims of the so-called Santa Maria School Massacre became mythical hero-martyrs symbolising the depth of social injustice. The emblematic significance of the massacre peaked in the early 1970s during Salvador Allende’s presidency, after the Iquique musician Luis Advis – a leading composer of Latin America’s socially committed “New Song” movement – released his painstakingly researched cantata, Santa Maria de Iquique. The epic 18-song narrative achieved great success and is considered by musicologists to be one of the most important compositions in Latin American history. And, for the first time, it finally exposed to the world what had occurred at the Santa Maria School – a colossal tragedy that so easily might have remained forever buried.

At the turn of the twentieth century, sodium nitrate was the most lucrative of all Chile’s exports. The nitrate mines, owned by Chilean and British capitalists, were notorious for treacherous working conditions and labour exploitation. Mobilised by anarchist groups and the nascent labour unions, in early December 1907 thousands of nitrate workers carrying the flags of Chile, Peru, Bolivia and Argentina descended from the hills to the northern provincial capital of Iquique to demand better conditions. So infamous was the misery of these miners that they were joined in solidarity by 12,000 labourers from all trades, bringing nearly all commerce and industry in northern Chile to a halt. An estimated 5,000 workers occupied Iquique’s Santa Maria School for over a week while Chile’s President Pedro Montt – who’d come to power through the support of the labour movement – initially attempted to facilitate talks between workers and the mine owners. But as the numbers of strikers continued to swell, President Montt ordered General Roberto Silva-Renard to end the strike by any means necessary.

At 2:30pm on December 21st, Silva-Renard issued a warning to the leaders of the workers’ committee to disperse within an hour. The leaders refused, and stood firm atop the school’s roof. Exactly one hour later, Silva-Renard ordered his soldiers to aim their guns at the rooftop. All the strike leaders fell dead with the first volley. The amassed workers and their families desperately fled in all directions in a futile attempt to escape as they were shot down mercilessly with machine guns. The soldiers then stormed the school grounds, firing frenziedly into the classrooms with no regard for the women and children screaming in vain for mercy. At nightfall, they hauled and dumped the thousands of bodies into a clandestine mass grave. The survivors were ordered at sabre point to get back to work, whereupon they were subjected to a decade-long reign of terror before the labour movement could begin to recover.

In his report to the government, Silva-Renard – “the Butcher of Iquique” – blamed the strikers for his heavy-handed actions, and was in turn promoted to Brigadier General as a reward for his defense of democracy, law and order. In 1914 he was blinded and rendered invalid in an assassination attempt by the brother of one of his thousands of victims, and was buried with full honours when he died seven years later.

In August 2007, as the centenary of the massacre approached, Chile’s President Michelle Bachelet ordered a team of archaeologists and forensic scientists to excavate the site that was for so long rumoured to be the mass grave of the Santa Maria School Massacre victims. Nearly 2,500 bodies were exhumed. As Chile owned up to the truth of its shameful past, public exhibitions were mounted, a monument to the dead was erected, a national day of mourning was decreed – and General Silva-Renard’s name was quietly removed from the artillery regiment that had been posthumously denominated in his honour.