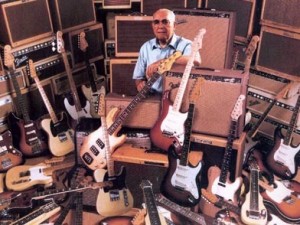 Today we pay tribute to the sustained visionary genius of Leo Fender, whose extraordinary deployment of Edisonian technology catapulted the previously minstrels-only 6-string guitar to the forefront of the post-war rock ‘n’ roll revolution. Yes, it must be understood that Les Paul’s invention pre-dated the first Fenders – but Leo Fender’s 1951 Telecaster and 1954 Stratocasters were such genuinely futuristic inventions that the acoustic instrument of yore was henceforth replaced by a simple laminated length of wood. Initially considered too much of a novelty to any right-minded career guitarist, Fender’s instruments first caught the ears of travelling Country and Western guitar pickers, who adored their compact slimline cases and the crisp sound that they achieved. Leo Fender’s was a sustained and breathtaking genius. Whereas his rivals Gibson Guitars attempted always to make their electric guitars look at least somewhat traditional in the acoustic mode, Leo always approached the electric guitar for what it was – an entirely new instrument. When electric guitars and drums began to overpower the upright double bass, Fender simply lengthened the scale of his electric guitars and lo, the Fender bass guitar was born. And just as we still use the generic term “Hoover” for all our vacuum cleaners, early rock ‘n’ roll credits would always state “Fender bass” whatever make of instrument had been used on the recording. It is not the place of this On This Deity entry to provide an instrument inventory of Leo Fender’s outstanding achievements, rather we must instead note that rock ‘n’ roll would have been a far sorrier art form without him, if it could have even existed at all without such a World Visionary at its helm.