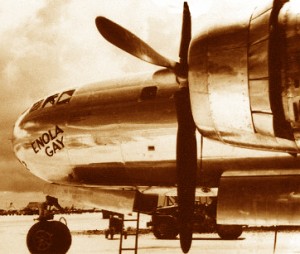 Seventy-five years ago today saw the maiden flight of the Boeing B-29 Superfortress, that huge American warplane whose atomic load would, with the bombing of Hiroshima, bring World War 2 to a sudden and dreadful conclusion. Faster, vaster, and with fuel tanks capable of carrying this heavy bomber over five-and-a-half thousand miles at a time – 2,000 miles further than any comparable contemporary aircraft – the B-29 was to become a potent symbol of America’s emergence from insular, strictly non-interventionist policies abroad into its aggressive Cold War role as Self-Appointed World Policeman. Hereafter, American aircraft technology endeavoured to bring all of the outside world within the range of its strategic bomber command, as subsequent postwar developments would draw up ever larger and more deadly warplanes such as the B-52 and the B-36 (cynically nick-named ‘The Peacemaker’).

In those decades before World War 2, the United States of America’s insular policy of neutrality owed much to the country’s remote geographical location, its homeland being protected to the east by 3,000 miles of Atlantic Ocean, and to the west by 7,000 miles of the Pacific. However, the Pearl Harbour attack, on December 7th 1941, so shattered Americans’ delusions of safety that President Roosevelt declared war on Japan the very next day. Nevertheless, it is mainly coincidence that the Superfortress flew for the first time just seven months after Japan’s infamous attack. For the B-29’s origins lay in the American Government’s erroneous fear that all of Europe would fall to Hitler’s Nazi regime, and that the Allies would be forced to continue the war by bombing Germany from bases in the USA and Canada. Once in this mistaken mindset, however, the canny American government soon appreciated how the deployment of such inter-continental weaponry could affect positively not just the immediate outcome of the USA’s war against distant Japan, but also compromise the postwar homeland security of the entire Soviet Union itself.  Though, somewhat ironically, the Russians had only to wait for three B-29s to make emergency landings in the Soviet Union in order to clone the Superfortress as the Tupolev Tu-4. Today, therefore, we note with a dreadful sadness that fateful day sixty-eight years ago when all of the world’s most remote and most beautiful places finally came within the range of America’s Atomic Bomb.

“A prosperous United States exerts, directly and indirectly, an immense beneficent force upon world affairs,” wrote Winston Churchill, in December 1937. Of our Modern World’s so-called policemen he did, however, add this ominous caveat to which we should pay ever increasing attention: “A United States thrown into financial and economic collapse spreads evil far and wide.”