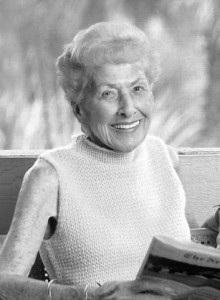 There are many reasons why a pregnancy may be unwanted. A woman may have no access to contraception or already have too many mouths to feed. It may endanger her health, even her life. She may have been raped. The foetus may not be viable. No matter what the circumstances, the decision to terminate a pregnancy is one of the most difficult that a woman will ever make. So imagine how much tougher it would be if abortion was illegal. Millions of women across the world are still denied the right to a legal, clinical abortion for political, cultural and religious reasons.

And so today, the women of North America can thank their lucky stars for the work of obstetrician and gynaecologist Dr Jane Elizabeth Hodgson who died in 2006 aged 91, after a 50-year career.

Brought up in the early 20th century to consider abortion as immoral, the more Dr Hodgson saw the more she began to understand that the lack of abortion was immoral. She was troubled by the numbers of women attending her clinic begging quietly and desperately for abortions. Especially heart-breaking were the numbers of women she treated for complications from botched back-street jobs: you can imagine the kind of terrible injuries and infections she came face to face with. And all of it preventable. The majority of her work took place at home in Minnesota, but she worked in Africa and Central and South America. Everywhere she went she observed women’s lives, health and ambitions blighted by a lack of reproductive choice. She noted that: “a woman’s place in society was directly related to the availability of abortion services, contraception and family planning services. In countries where it was all illegal, women were much worse off as far as their overall rights, health care and poverty levels.” Look around – it is still the case.

In a 1970 a young pregnant mother of three arrived at Dr Hodgson’s clinic. She had contracted rubella, a devastating disease which causes defects in the unborn child. She wanted an abortion, sadly illegal in Minnesota except to save a woman’s life. Hodgson realised this could be the test case she needed to promote her cause. Hodgson was convicted of the ‘crime’ and sentenced to 30 days in jail, becoming the first US physician to be convicted for carrying out an abortion in hospital. Other legal challenges would follow. She established sexual health clinics, campaigned to ensure that women receive full reproductive health care and changed laws.

Throughout her life Dr Hodgson was harassed as a baby killer, sent hate mail and intimidated by small-minded people more interested in maintaining their vile dogmas than the health of vulnerable, frightened women. “If at any time I’ve ever had any doubt about what I’m doing, all I have to do is see a patient, and talk to her, and I realise it’s the right thing” she said.

Well into her 70s she was still practicing. When other physicians would not carry out an abortion having been scared off by the abusive, placard-wielding morons, they would call on Dr Hodgson knowing that she would go to a woman’s aid calmly, swiftly and without judgement.

It’s incredible to think that there are still people out there who wish to deny women basic reproductive choices and will resort to violence to achieve it. And so to the sacred-foetus-brigade, I say this: if you don’t want an abortion don’t have one. But if my daughter needs one, she’ll have one thanks, and it’s none of your damn business. It is not for anyone except the individual woman to make reproductive decisions for her.