24th February 1942 the Death of the Joint Fuehrer 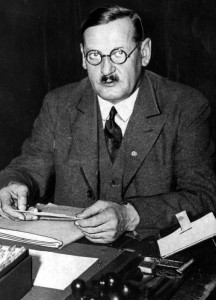 Today we consider the curious case of Anton Drexler, the artist-mentor of Adolf Hitler and temporary Joint Führer, who died on this day in 1942. Joint Führer? Surely not! Why, even the possibility of a world solipsist such as Hitler sharing the leadership of the Nazi Party… how could this be? The facts are that the bizarre rise of Adolf Hitler deployed such extravagant sleights of hand, such brazen acts of deception (and even self-deception), such meticulous manipulations of German democracy that NOTHING NOTHING NOTHING should ever surprise us with regard to the evils surrounding this World Herostratus that assailed us under the name of Nazism. “[Throughout 1920-22] Drexler was referred to as the party’s ‘Führer’, as was Hitler; or sometimes both in practically the same breath,” according to Hitler’s biographer Ian Kershaw. By the time of the 1923 Beer Hall Putsch, however, Anton Drexler had long been deposed as Joint Führer, his role so diminished that he was still on his way to attending that night’s Nazi rally and heard of the planned Putsch only when he bumped into two Nazi colleagues on a local bus. Nevertheless, it is most certainly the role of On This Deity to alert future peoples of the bizarre gremlins that twist and turn us not down the major arteries of human endeavour but down random desperate culs-de-sac, causing a psychic appendicitis of the kind that beset the Germans of the 1920s and 30s, rendering them childlike, authority obsessed and too enfeebled to repel the coming Nazi Holocaust.