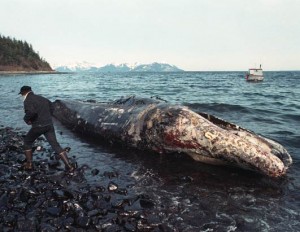 At four minutes past midnight on March 24th 1989, the supertanker Exxon Valdez ran aground on Bligh Reef in Prince William Sound, Alaska. Despite not even being in the top 50 global oil spills by volume, the Exxon Valdez disaster quickly came to symbolise the destructive impact of modern industry on the natural environment. The remote location made mitigation and clean up efforts next to impossible (less than 10% of the oil was recovered) and the incredible beauty of the pristine wilderness into which the tanker dumped half a million barrels of crude oil served to magnify the tragedy. Even the more recent Deepwater Horizon disaster in the Gulf of Mexico – though it involved more oil and had a far greater direct human impact – does not compare to the Exxon Valdez spill in terms of the stark imagery it produced, graphically demonstrating humanity’s utter disregard for the planet that supports us.

In the subsequent investigation, much was made of the fact that the ship’s Captain, Joseph Hazelwood, was drunk when the Exxon Valdez ran aground. Let us here and now put that particular red herring to bed. The Exxon Corporation seized upon Hazelwood’s condition in an attempt to deflect blame… to play the “one bad apple” game and absolve themselves of responsibility. But the reality is that while the Captain had indeed been drinking, he was off-duty and asleep when the tanker ploughed into Bligh Reef. On lengthy sea voyages which can last several days, even weeks, the ship’s captain is obviously not expected to be awake for the duration. We can certainly question the wisdom of a man in his position getting drunk in the first place, but we can hardly hold him responsible for an accident that occurred while the duty roster had him sleeping in his cabin.

It is a testament to the power of the Exxon public relations machine that even today most people will shake their heads ruefully at the “drunken captain” of the Exxon Valdez whenever the subject is brought up. This, despite the official enquiry clearly pointing the finger of blame at the Exxon Corporation for a number of cost-cutting measures that dramatically increased the likelihood of an accident – most notably their failure to repair the tanker’s Collision Avoidance System which had been offline for over a year.

The destruction wrought by the crude oil upon the flora and fauna of the Prince William Sound and the surrounding area was massive. A couple of days after the tanker ran aground, the area was hit by a storm which drove the oil onto large swathes of the coastline, effectively ending any hopes of capturing the spill using floating booms and surface skimmers. An estimated quarter of a million seabirds, thousands of mammals (otters, seals, whales and more) and countless fish perished as a direct result of the spill. Even today, more than two decades later, the region has not recovered from the blow it was dealt by our relentless pursuit of petrochemicals.

To compound the damage caused by the oil, many of the strategies employed to clean up the spill were counterproductive. Chemical dispersants were used that turned out to be more toxic than the oil itself; sections of the coastline were hosed down using hot water at high pressure destroying colonies of microbes that would have facilitated the biodegrading of the oil as well as killing a large amount of the plankton that had escaped harm, further damaging the ecosystem.

… the lines between man and environment are purely artificial, fictitious lines. They are lines across the pathways along which information or difference is transmitted. What thinks is the total system which engages in trial and error, which is man plus environment.
[…]
You decide that you want to get rid of the by-products of human life and that Lake Erie will be a good place to put them. You forget that the eco-mental system called Lake Erie is a part of your wider eco-mental system – and that if Lake Erie is driven insane, its insanity is incorporated in the larger system of your thought and experience.
– Gregory Bateson (Pathologies of Epistemology)

While we should not lose sight of the individual tragedy of the Exxon Valdez spill – from the damage done to the Alaskan wilderness to the multiple suicides among local residents whose livelihoods were decimated – we should also remember that as an event, it is a symptom of a far wider malaise. Industrial civilisation suffers from a collective psychosis… a schizophrenia that warps our perception of reality to the point where we’re unable to recognise the astonishing levels of self-harm we engage in as a species, and in the rare occasions when our attention is drawn to this self-destructive behaviour, we demonstrate time and again our inability or unwillingness to change.

We have developed a distinction between ourselves – as a species or a culture – and the wider environment in which we exist. Yet this distinction is wholly imaginary. We achieve this separation only by virtue of our flawed perception… epistemological lunacy. It allows us to view of our world in terms of resources to be exploited as we see fit. And it allows us to carry out that exploitation with an apparently clear conscience; to accept disasters like the Exxon Valdez oil spill as the sad but inevitable cost of “doing business” instead of as the psychotic acts of self-harm that they truly are.

To suggest that industrial civilisation is simply not worth the damage it causes is seen as absurd luddism… crazy talk. And yet, we know corporations will always cut corners and that even if they didn’t, human error cannot be legislated away. So those who dismiss such suggestions as crazy talk are really telling us that the agonising deaths of hundreds of thousands of birds, whales and other animals – along with the wanton despoiling of our home, planet earth – is a price worth paying to drive our SUVs and watch our plasma televisions. We have decided to collectively shit in the well, and those who object are labeled village idiots.

So today, on the anniversary of the Exxon Valdez oil spill, let us not only pause to remember the terrible tragedy that occurred in Alaska 23 years ago. Let us also reflect on the fact that we have learnt absolutely nothing from it.