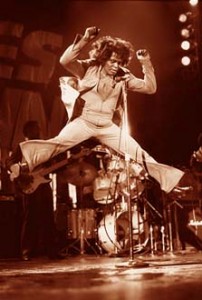 Today we pay tribute to James Brown – the legendary Godfather of Soul and self-proclaimed  ‘Hardest Working man in Show Business’ – whose death on Christmas Day 2006 robbed us of a true World Artist and Culture Hero of the highest order, a unique and uniquely-focussed individual whose single-mindedness and persistence throughout the turbulent ‘60s and ‘70s contributed vastly to adjusting the manner in which post-war African-Americans viewed themselves. Combining the worldview of the shaman with the dance of the showman, James Brown – for over five decades – delivered up a compelling brand of electrifying and frantic soul music over which he discussed every current major black issue, and then some. Sex and the sexual revolution were of course at the head of Brown’s early subject matter. But, in time, civil rights, racial equality, drug culture, poverty and hunger all took their places as regular J. Brown themes: themes that increasingly preached African-American self-reliance. Endeavouring to practise what he preached, Brown throughout the ‘70s always block-booked recording studios, ensuring maximum 24-hour usage by organising cheap ‘downtime’ sessions for other lesser-known James Brown-related artists – trombonist Fred Wesley, singer Lynn Collins or perhaps the JB’s themselves – Brown’s record company Polydor Records thus unwittingly facilitating all kinds of fine extraneous underground record releases. Was Brown a Commie, a Socialist? Nope, but being a cultural beacon and pillar of inspiration who drew to himself only the most inspired and extreme young musicians, James Brown – like fellow modern African-American shamen Miles Davis, Sly Stone and George Clinton – clearly felt compelled, even morally obliged to promote and mythologize his many cohorts.

It was in May 1967 that James Brown executed his bravest and most avant-garde move with the release of his single ‘Cold Sweat’, a monotonous and compelling on-the-one groove that was to change soul music forever. Arguably the first funk record, the futuristic ‘Cold Sweat’ and James’s subsequent ‘On-The-One’ canon would inspire scores of future acts from George Clinton’s Funkadelic to Cologne’s Can via New York’s No Wave scene to Miles Davis himself. And so, although James Brown commenced his career in the ‘50s as no more than a Little Richard copyist, he was by his career’s conclusion the most sampled dance artist in history: his beats, his grunts, his laughter, his delighted inchoate chatter, even his spoken instructions to the JB’s, everything now considered worthy of sampling. James Brown was the living embodiment of funk, a consummate showman so polished and so damned showbiz-professional that it’s easy to forget just how radical much of his music was. His Soul Review presentation, his extraordinary dance routines, his emphasis at all times on the Sat’day Night entertainment aspect of his act: all of these elements conspired ultimately to undermine our perception of his true role, a role which should be described, during his career’s height at the very least, as that of a top-class cultural commentator – a metaphysical narrator who dared to create then corral all of these monolithic soul grooves, reducing them to no more than vehicles for his musings and narrations on the current state of African-American affairs.