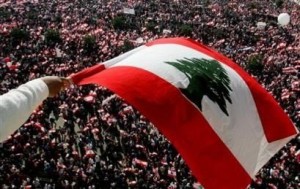 On the morning of May 22nd 2000, Israeli armed forces began to pull out of Southern Lebanon, signalling the end of a military occupation that had lasted more than two decades. Within three days the withdrawal was complete and by the evening of the 25th of May, the state of Lebanon was no longer occupied by its southern neighbour. However, although we celebrate May 25th as “Lebanese Liberation Day” – just as we celebrate the ending of any military campaign or foreign occupation – our celebration is tempered by the incomplete nature of that liberation. Syrian forces continued to occupy parts of Lebanon right up until 2005, and even today the nation is riven by internal tensions as a host of domestic and foreign-sponsored groups struggle for influence and power over a land whose inhabitants have spent the past sixty years hostage to the recklessness, insanity and power politics of their neighbours.

In fact, the history of foreign dominion over the lands of Lebanon stretches back a good deal further than the 20th century. The cities of Lebanon have long been centres of culture and commerce. And as homeland to the Phoenicians, Lebanon can justly claim a huge influence over the development of Mediterranean civilisation, founding cities and setting up trade routes throughout the entire region. But as is so often the case with major trade centres, Lebanon found itself frequently over-run by the empires that surrounded it. History has seen the Lebanese people become subjects of the Egyptian, Persian, Assyrian and Hellenistic Empires. Then the Romans took over and Lebanon remained part of the Roman / Byzantine Empire until the rise of the Rashidun Caliphate in the 7th century. Then, aside from a stint as a Crusader State in the Middle Ages, Lebanon spent the next millennium as a province of the great regional powerhouse to the north, Turkey; alternately under the flag of the the Seljuk, Mamluk and Ottoman Empires.

With the final collapse of Turkish power after World War One, Lebanon again changed hands. The British and French, having become accustomed to drawing borders and planting flags, decided that Lebanon should be French territory, which is how it remained until World War Two when it finally declared independence and saw foreign troops leave its soil for the first time in thousands of years. By 1946 the people who had once dominated the Mediterranean region, founding great cities such as Tyre and Carthage, were once again in charge of their own destiny.

But it was to be a short-lived sovereignty and within two years the seeds of tragedy were being sown in Lebanon. Having drawn up a progressive constitution that guaranteed power-sharing between the various religious and ethnic groups within the country, and a tolerant and liberal civil society free of many of the oppressive and discriminatory policies of their neighbours, the nation found itself dragged into the 1948 Arab-Israeli war. Despite having a tiny standing army, and being involved in little more than border skirmishes with Israel, Lebanon made an enemy of the emerging regional superpower and suffered the consequences. Over one hundred thousand Palestinians were driven into Southern Lebanon by the Israeli military and subsequently denied permission to return. The consequences for Lebanese society were to prove disastrous as the massive refugee camps became a breeding ground for militancy in the guise of the newly formed Palestinian Liberation Organisation (PLO).

For the next quarter century Lebanon struggled to cope with growing unrest in the South as tensions between the PLO, Israel and the locals increased. All the while, the nation attempted to reposition itself as a regional trade hub and for a while it seemed as though it might actually prosper; avoiding the spiral of violence that, with the clarity of hindsight, appears almost inevitable to us now.

By the mid-1970s the Palestinian population in Southern Lebanon had risen to over a quarter of a million and the PLO was using the area as a base from which to launch attacks against Israel. Israeli expansion during the previous decade had rendered the entire Palestinian people effectively homeless and the pressures created by this displaced population threatened the stability of several countries. In 1975 those pressures erupted into the Lebanese Civil War. The brief flowering of peace and optimism in Lebanon during the 1960s was brutally snuffed out.

The details of the Lebanese Civil War are staggeringly complex. As one commentator put it, “by the end of the conflict every group had been both an ally and an enemy of every other group at least once”. And that’s only a slight exaggeration of the truth. The civil war involved several domestic Lebanese factions, the PLO and other Palestinian groups, the militaries of both Syria and Israel, plus a number of militias sponsored by external powers (Israel, Syria and Iran). Into this mix were also thrown UN troops, a peace-keeping group answering to the Arab League and the lurking presence of the US navy just a few miles off the coast. It was chaos, and by the end of the civil war Lebanon had been reduced to rubble, perhaps a quarter of a million people were dead, a million injured and half the population had been displaced. On top of that Syrian troops occupied parts of the country and Israel had assumed control over the south .

When discussing the Middle East, it’s traditional to take either a pro-Israeli or pro-Palestinian position. But viewed from a Lebanese perspective it’s tough to have sympathy for either Isreal or the PLO in the context of their activities in South Lebanon. The inhabitants of those Palestinian refugee camps had (and still have) a legitimate grievance. But when the PLO began to wage a war against Israel from Lebanon, it was clearly not going to end well for those caught in the crossfire.

In 1978, three years into the civil war and with Syrian troops already on Lebanese soil, the PLO carried out the Coastal Road massacre in which 38 Israeli civilians were murdered. The attack was planned in – and launched from – Lebanon. Within three days Israeli troops had crossed the border.

Over the next five years, the Israeli presence was relatively small and confined to a “buffer zone” in the far south. But the war of attrition between Israel and the PLO continued, all the while destroying Lebanese civil society and economic life. In the early 80s Israel concluded that the only way to defeat the PLO was to drive them completely out of Lebanon. A full-scale invasion and military occupation commenced that saw attrocities carried out by both sides, but given the overwhelming military advantage enjoyed by Israel and the militia groups it sponsored, the disparity in casualties isn’t surprising. In the Sabra and Shatila massacre alone, as many as 3,500 Palestinian refugees were murdered during three brutal days in September 1982. At the height of the occupation, Israel occupied the country as far north as Beirut and both Lebanese and Palestinian alike were living under martial law. The carefully crafted constitution of the 1940s and the peace and prosperity that followed was already a fading memory by the time the complete collapse of the Lebanese state occurred in the late 1980s and the President of Syria became the de facto leader of unoccupied Lebanon.

Lebanon found itself stuck in this tragic situation for the next decade or so. Even as Israel succeeded in driving the PLO out of Lebanon, it paved the way for the arrival of Iran-sponsored Hezbollah to fill the power vacuum in the refugee camps after the PLO leadership structure had been killed or forced to flee. By the mid-90s Lebanon was hosting a proxy war between Syria and Israel, a proxy war between Iran and Israel, and a proxy war between Iran and Syria. And whether it was the Lebanese, the Israelis or the Syrians… everyone was at war with the Palestinians. The rubble got reduced to dust and still the wars raged.

But by the late 1990s the Israeli casualties were starting to mount and the realisation that the occupation of Lebanon was making things worse, not better, had started to filter up the command structure. Unlike other military occupations, this one did not end with a decisive battle or a painstakingly-negotiated Home Rule treaty. Instead a political decision was made in Tel Aviv and less than a week later the army checkpoints and patrols, the twenty-year tyranny that had become a routine in Southern Lebanon, were gone.

And yes there was celebration. The end of the occupation did not signal the end of Lebanon’s problems, but it provided a reminder to the Lebanese people that things don’t always have to get worse. It’s not an inevitability. Five years after the Israelis pulled out, the Syrians withdrew their forces as a result of popular pressure from within Lebanon. Another step forward. And although the problems of Lebanon will never be completely resolved as long as it has a large, angry and unintegrated refugee population within its borders, and although the fragile national unity government collapsed earlier this year as a result of a dispute about Hezbollah, still we celebrate Lebanon Liberation Day, as much in hope as in remembrance; as a reminder that even the most intractable of problems might be solved one step at a time.