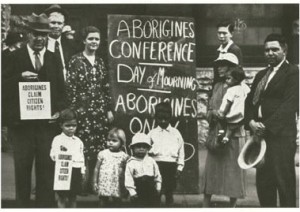 On this day in 1788, the “First Fleet” of eleven ships arrived at Sydney Cove, Australia. Its passengers were the first white settlers of this remote continent: some 750 convicted petty criminals and 500 marine guards and officers shipped out of Britain to a barely explored fringe of the world in order to establish a penal colony and take possession of New South Wales in the name of King George III and the British Empire. Eighteen years earlier in 1770, Captain James Cook ‘discovered’ Australia and declared it “terra nullius”, or “no man’s land.” But the land was not no man’s; it was of course already inhabited by over 500,000 Aboriginal people who had been there, as the Latin translation of ab origine indicates, “from the beginning.” Their stone-tool technology pre-dated that of Europe and Asia by thousands of years, their social organisation was highly sophisticated, their religion deep and complex, their art and myths rich and varied, and their relationship to the land profound and sacred. Relations between the settlers and Aboriginals were hostile almost from the beginning. Theft of land, the introduction of deadly European germs and diseases, kidnapping of children, rape of women, poisoning, shooting, beheading… is it any wonder the Aboriginals were ‘hostile’? By 1824, colonists were even authorised to ‘hunt’ these ‘wild animals’ for sport. One hundred and twenty years after British settlement, the Aboriginal population had been reduced to only 31,000.

The anniversary of the First Fleet’s arrival in Australia came to be a day of celebration amongst the colonists – a tradition that’s continued to the present is recognised as “Australia Day”. But to celebrate this national public holiday on January 26th perpetuates the myth that Australia was peacefully settled and is, for the indigenous population, a painful and offensive reminder of the theft of their sacred land, the White Australia Policy, the Stolen Generations and racial genocide.

On 26th January 1938, the first Aboriginal activists to protest this objectionable celebration declared a ‘’Day of Mourning’ to mark “the 150th anniversary of the Whitemen’s seizure of our country … You took our land by force … You have almost exterminated our people, but there are enough of us remaining to expose the humbug of your claim to be civilised, progressive and humane.” In recent years, the Indigenous population has adopted “Invasion Day” as an alternative observance of Australia Day – while a movement spearheaded by the Australian Natives Association has called for the nation’s official holiday to be held on a different date in order to ‘truly reconcile’ Australia. According to Mick Dodson – Aboriginal Law Professor and Australian of the Year for 2009:

90 per cent of people are saying Australia Day should be inclusive of Aboriginal and Torres Strait Islander cultures. I firmly believe that some day we will choose a date that is a comprehensive and inclusive date for all Australians.

Ninety percent? That so many feel so strongly should be evidence enough of the need for the extension of a symbolic and long overdue olive branch to the First Australians.