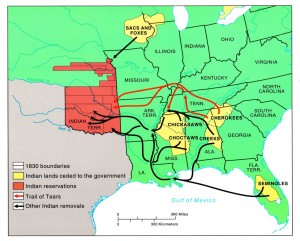 Today we lament the passage of President Andrew Jackson’s Indian Removal Act – paving the way for White America’s long-wished-for heave-ho of all American Indians to lands west of the Mississippi river. “What good man would prefer a country covered with forests and ranged by a few thousand savages to our extensive Republic…filled with all the blessings of liberty, civilization, and religion?” asked Jackson – a renowned racist – in his very first address to Congress as president just one year earlier. And he wasted no time in forcing through the controversial Act – ultimately passed after bitter debate by a narrow margin of just 15 votes. All previous treaties were voided. Resettlement was in theory “voluntary,” but those who resisted could be forcibly removed. Even a Supreme Court ruling in favour of the land rights of the Cherokee was overturned at Jackson’s behest.

The principal victims of removal were the so-called Five Civilised Tribes – the Cherokee, Creek, Choctaw, Chickasaw and Seminole – but numerous smaller tribes were also targeted. The infamously brutal westward journeys of these Native Americans have been well documented; the Cherokees, force-marched by military escort along the notorious Trail of Tears from Georgia and North Carolina to the Indian Territory, lost one-fourth of their people. Those who survived the ordeal to reach their destination faced a host of new difficulties. They quickly came into conflict with hostile indigenous tribes while the territory set aside for them was alien, harsh and often untenable. The United States government, meanwhile, acquired millions and millions of acres of fertile Southern lands, which it sold at little or no profit to speculators and settlers, in effect subsidising the expansion of the cotton industry and the slave system.

White Americans, believing that the United States would never have need to expand beyond the Mississippi, accepted Jackson’s self-serving and short-sighted argument that removal was in the interest of the Indians; once resettled, they could govern themselves in peace.

And so, for ostensibly ending the long-running conflict with the east-of-the-Mississippi Indians, Jackson was hailed as a hero. But it wasn’t long before the next land-grab began. With the great migration westward a mere decade later, white settlers clashed with the Indian inhabitants. Ignoring earlier treaties, including those agreed in the Indian Removal Act of 1830, the United States once again forcibly removed Indians from their land and sent them to reservations that became ever smaller in size. The Indian Removal Act, originally conceived as a final solution to the Indian problem, was thus just another step in the long process of illegitimately removing nearly all Indian claims to land desired by the United States.

President Andrew Jackson was responsible for the deaths of tens of thousands of Indians. As historian Bettina Drew asserted:

More than any one other individual, Jackson banished Native Americans from our visual realm, our culture and our gene pool, and this should be recognized as his legacy.

Instead, Andrew Jackson’s face is commemorated on the twenty-dollar bill. The only thing that guy should be ‘noted’ for is genocide!