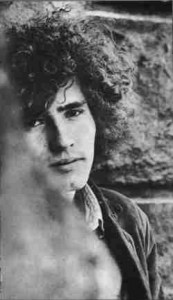 Today we lament the tragic and untimely passing of rock’n’roll’s most revolutionary vocal stylist  – the beautiful Tim Buckley – wrenched away from this planetary existence on this day in 1975, aged just 28. Had he survived his tragic fate, who knows what ecstatic new highs and churningly deep lows this mischievous yodelling leprechaun could have brung us? Signing to Elektra Records in 1966 after a brief spell as Nico’s teenage guitarist, and accompanied – Donovan/Gypsy Dave-stylee – by his own poet/familiar Larry Beckett, Buckley’s first two LPs TIM BUCKLEY and the soaring and sumptuously produced GOODBYE & HELLO placed the nineteen-year-old on the edge of hippy superstardom by early ‘67. But when Tim’s exquisite performance of the timeless ‘Song to the Siren’ on the Monkees’ TV show enraptured millions of spellbound teenage girls, this immaculately hip troubadour immediately turned his back on the kind of  ‘Face of ‘67’-style magazine stardom that beckoned; ditching his cool young hippie musicians in favour of a bunch of middle-aged jazz uglies… ug-leez. Entirely absent from this new music were those baroque pop structures previously demanded by Larry Beckett’s keenly observed lyrics, Buckley’s new vocal path being instead a yelping dance through fire, a kundalini guru’s walk on gilded splinters, a relentlessly speculative and even unrewarding experiment. But at its peak, what a ride this music could be: a sonic Cresta Run no less. The blissful songs of this new LP HAPPY SAD stretched way out instrumentally into proto-meditative states, ambient ballads of impressionistic heat haze that evaporated on touching, as did the jarring, near inchoate stumbling genius of the bizarre LORCA, whose six blissful burnt offerings often collapsed in on themselves so strung out was the vibe. Ah yes, but so far from Elektra’s initial commercial expectations had Buckley by now swerved that this final extraordinary disc was passed over as a major release by Elektra and allowed merely to seep out via the company’s mid-price label. Buckley’s next home on Frank Zappa’s Straight label immediately yielded another artistic triumph in the glorious BLUE AFTERNOON, sumptuously packaged and brimming over with shimmering organic experiments. But the rage and range of its follow-up 1970’s STARSAILOR often veered too close to the jazz leanings of Tim’s Frank Zappa sidemen, and those all important strung out grooves which had previously acted as vehicles for Tim’s vocaleptics were, on STARSAILOR, too often faded out before he’d really kicked off.

Thereafter, the 1970s would prove difficult, even arduous for Tim Buckley. His management bailed on him, his jazz musicians prevaricated and his audiences evaporated even further. So with his free music experiments put temporarily on hold, this loveable but un-hireable jazz elf held his tongue temporarily whilst LA producers drew out of him performances of songs written by others, even such standards as ‘Sally Go Round the Roses’. Ho-hum. Thereafter, heroin use, a bad haircut and his itinerant lifestyle soon took its toll on the famous Buckley looks, whilst the hack artwork of his final three LPs – GREETINGS FROM L.A., SEFRONIA and LOOK AT THE FOOL – show us evidence enough of our hero’s tragic can’t-be-arsed decline and evaporating muse. Ironic it was, then, that Buckley – only after a comparatively successful series of Texas shows – succumbed on June 29th, 1975 to an accidental heroin overdose, dying at 9.42pm from ‘acute heroin/morphine and ethanol intoxication’. Many friends and family members believe that Buckley overdosed due to his body’s over-reacting to his drastic clean up of the preceding months, whilst one close friend declared to me back in 1981 that Tim Buckley’s death should really be regarded as an unproven homicide, arguing that Tim had so successfully and so visibly reduced his heroin use that any friend offering him the drug should have known how hazardous it could have been to him.

With all of this in mind, we should now reflect on what a tragic loss the death of Tim Buckley was to ‘70s rock’n’roll, for his main sequence of LPs offer extraordinary and sustained evidence of a compelling Ur-spirit at work. Had Punk and the New Wave re-ignited that spirit, he may – like near contemporaries Peter Hammill, John Cale and Robert Wyatt – have enjoyed even greater notoriety than the first time around. But it was not to be. So let’s now salute this elusive elemental whose looks drove women crazy and whose ways charmed all around him, and let all true rock’n’rollers now bow their heads in symbolic acknowledgement of Tim’s dazzling series of roaring and righteous works. To Tim and his adventuresome spirit, let none forget.