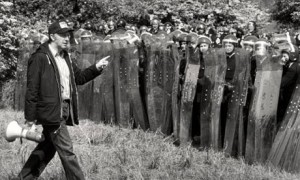 Before the Dream Faded. NUM leader Arthur Scargill at Orgreave

On this day, the UK Miners’ Strike of 1984-85 ended in defeat for Arthur Scargill and the National Union of Mineworkers when miners reluctantly and bitterly voted to return to work. The strike, lasting just two days short of a year, was Britain’s longest and largest industrial dispute. It was also a pivotal turning point in post-war British history – the seminal moment when Britain’s Left was brutally, comprehensively and thus far subjugated. Before 1984, Britain had been an industrial nation – resuscitated from the ashes of the Second World War by Clement Attlee‘s socialist-democratic vision of a welfare state with its National Health Service and nationalised industries. But when Margaret Thatcher and her Conservative government came to power in 1979, they determined to unleash privatisation and free market policies on the whole of society – and the only way to do that was by destroying the trade unions.

The miners’ strike began on 5th March 1984 after the Tories announced a programme of pit closures; by 12th March, half of Britain’s 187,000 miners had downed tools. But Thatcher – riding high from her victory in the Falklands – had secretly and cynically prepared for battle by stockpiling two years’ worth of coal before announcing the closures. And she was hellbent on defeating “the enemy within” by any means necessary, even if it meant turning the full force of the state against its own people. For the first time in a postwar national strike, British police were openly used as a political weapon. Civil liberties were forgotten as miners were beaten and arrested even when standing still. Agent provocateurs and spies were deployed. State benefits were withheld in order to starve the miners back to work. And the media was used to portray the miners as thugs. What had begun as an industrial dispute degenerated into a clash of ideologies and civil class war.

For an entire year, some 130,000 miners and their families suffered unimaginable hardships in order to save jobs and preserve communities. But despite the strikers being pitted against the full force of the ruling class, and additionally betrayed by the Trades Union Congress and Labour Party’s refusal to mobilise support, some extraordinary stories of grassroots British solidarity emerged: the refusal of print workers at The Sun to allow the publication of a doctored photo of Arthur Scargill appearing to make a Nazi salute; rail workers blocking the delivery of coal to the Orgreave coking plant; attempts by the alternative media to counter the shameful distortions of the mainstream coverage; the generosity of the Sikh community which regularly provided free meals; and the indefatigable work of the local miners’ support groups, especially the remarkable Women Against Pit Closures.

Fundraising allowed the strikers to hold out for as long as they did, but in the early months of 1985, increasing numbers began to drift back to work as the hardship became too much. And, on 3rd March 1984, an NUM delegate conference narrowly voted to end the strike. The miners marched back to work together, brokenhearted but their heads held high in defiance. Thatcher was graceless in victory. “There is no such thing as society,” she infamously declared. Her neo-liberal blueprint would result not only in the selling off and selling out of the coal industry, but also the decimation of Britain’s manufacturing industry, the subjugation of all trade unions, and the doubling of unemployment and inflation. Indeed, the roots of the UK’s current financial chaos can be directly traced to the defeat of the miners’ strike and her subsequent privatisation policies.

The coal industry was never going to survive as it had been, but that’s not the point. A government has a moral responsibility for its population, but Thatcher heartlessly snuffed out thriving communities. The Tories spent £6 billion during the strike to defeat the NUM and would eventually spend £26 billion to dismantle the mining industry, leaving a nationwide residue of ghost towns rife with unemployment, drug addiction and anti-social behaviour.

Arthur Scargill recently gave his verdict on the strike’s legacy:

“Britain in 1984 was already a divided and degraded society – it has become much more so in the 25 years since … The NUM’s struggle remains not only an inspiration for workers but a warning to today’s union leaders of their responsibility to their members, and the need to challenge both government and employers over all forms of injustice, inequality and exploitation. That is the legacy of the NUM’s strike of 1984/85, a truly historic fight that gave birth to the magnificent Women Against Pit Closures and the miners’ support groups. I have always said that the greatest victory in the strike was the struggle itself, a struggle that inspired millions of people around the world.”