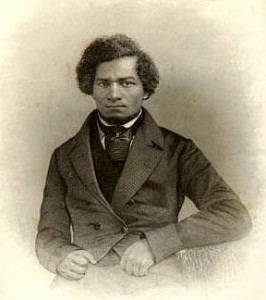 Today we recall the heroic escape to freedom of the great Frederick Douglass, America’s first black leader of a truly national stature, whose struggle from his slave roots in Maryland to successful published author just seven years later captivated the world and launched him as a public figure, great orator and spokesman of the burgeoning Abolitionist Movement. In his extraordinary autobiography, Narrative of the Life of Frederick Douglass, an American Slave, Douglass recounted the horrors of human bondage in a prose so eloquent that many white American sceptics doubted such a radiant talent could possibly have poured forth from a former slave. But both inside and outside America, the world was fascinated by this brilliantly written life story that blew the whistle on American racism and its two-tier notions of Freedom – and especially forced the peoples of Africa and Asia to re-evaluate their opinions of the ‘great’ USA.

It was not until twenty-eight years after Frederick Douglass’ famous escape that the American Civil War forcibly ended slavery in the American South, almost three long decades during which the unstinting abolition work, incisive writings and electrifying lectures of this handsome, erudite black man edified the doubtful American public far more directly and emotively than any white apologists could ever have hoped to do. For his autobiography would become his Ur-text, the foundation upon which all of his credibility would come to rest. And try as the sceptics might, their attempts to pick holes in Narrative of The Life of Frederick Douglass came to nothing – indeed, the closer his writing was studied, the more his story screamed with the gnostic truths of only one who had endured such a life.

So let us now take a brief look at those fateful and successful twenty-four hours that – after two previous failed attempts – brought Frederick Douglass physical freedom. For it was due only to his persistence and determination to be ‘Third Time Lucky’ that this heroic genius made good not only his own escape but – through his tireless efforts – would guarantee the future freedom in America of his entire race.

On September 3rd 1838, twenty-year-old Douglass – still using his birth name Bailey – boarded a northbound train with a ticket bought for him with the life savings of his lover, a free black woman by the name of Anna Murray. His owner, Frederick Bailey, had hired him out to work in Baltimore as a ship’s caulker, just 100 miles south of the Free State of Pennsylvania. Douglass dressed in a red sailor’s shirt, a black cravat, and carried with him a friend’s “sailor’s protection” document that certified that the person named on it was a free seaman. Luck was with Douglass, the train reaching Maryland before the conductor had even reached the ‘Negro Car’. And despite looking nothing like the document’s description, Douglass’ knowledge of sailing and ship’s customs was credible enough to hoodwink the conductor, who accepted his ticket and walked on. Douglass remained vigilant and ever on his guard when he arrived in Philadelphia, which – despite its free soil – was a busy port for slave-catchers. He then took another train north, arriving the following day in New York City where he was hidden by David Ruggles, a local Underground Railroad agent and secretary of the New York Vigilance Committee.

Two weeks later, his beloved Anna Murray arrived from Baltimore and the couple were married on September 15th. David Ruggles relocated the newlyweds to the safer haven of New Bedford, Massachusetts – where Frederick Augustus Washington Bailey became Frederick Douglass, having chosen his new name from James Douglas, a character in Sir Walter Scott’s epic narrative poem “The Lady of the Lake”.