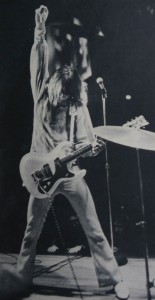 Today we pay homage to Fred ‘Sonic’ Smith, rhythm guitarist and songwriter with the revolutionary ‘60s Detroit band MC5: a Visionary Motherfucker who died of ill health at the age of just forty-five. More tragically, Sonic’s MC5 career (and role as credible revolutionary commentator) evaporated when he was just half that age, the sudden transition from ‘60s Us-ism into 1970s Me-ism – caused by the Revolution’s failure – forcing upon this obstinate, feisty and determined 23-year-old the role of the ‘has been’ or, even worse: outside Michigan he was a ‘never was’. So, just like his former bandmates and guru/manager John Sinclair, Sonic was forced for the rest of his life to dwell on the ‘mighta beens’ of a United States run not by the cadaverous be-suited proto-corpses of Kapitalism, but by the free-thinking and libertine ‘super patriots’ as envisaged by fellow MC5 guitarist Wayne Kramer.

Unfairly forced from the Revolutionary into the role of journeyman musician, the 23-year-old was thereafter highly cautious and selective regarding new band members. Throughout the 1970s, his new bands generally involved former MC5 members, rarely stretching beyond members of former Trans-Love Energies associates, such as the Stooges and the Up. In the mid-70s, however, Sonic – together with former Stooges drummer Scott ‘Rock Action’ Asheton and former Up bassist Gary Rasmussen – enlisted former Rationals lead singer Scott Morgan in order to put together the part-time Sonic’s Rendezvous Band. In a particularly weakened frame of mind, however, when Sonic signed the band up as backing band for Iggy Pop’s European Tour, he conveniently cut his co-star Scott Morgan out of the deal at Iggy’s request. Thereafter, Sonic lived quietly with his new wife, poet Patti Smith, until his death in 1994.

But let us not now give emphasis to the post-revolutionary Frederick, for his idealism was not burned out by drugs or by personal problems, but by the clandestine operations of the highest governmental authorities, all of whom had been determined to deal the ‘60s Revolution an out-and-out Death Blow. NOBODY could have survived what the MC5 were put through, except perhaps those musicians with their own key to the Federal Arsenal. So let us not remember Sonic for the ‘meagre years’, that highly compromised second half of his brief life, but instead commemorate (1) his legendary mouthiness towards band members visiting the Grande Ballroom – Cream’s Jack Bruce reported him for ‘insolence’ – and (2) for his bizarre and determinedly futuristic adoption of pre-Kiss superhero outfit replete with silver cape and a balaclava surmounted with a lightning bolt, and (3) for bringing to the MC5 (while struggling at the end of their career) four songs of such dynamic musical and lyrical intensity that their final LP High Time actually nailed their Revolutionary metaphor at last … albeit AFTER the Revolution had passed by! So please stand up today and raise your cups to Fred ‘Sonic’ Smith. Motherfucker!