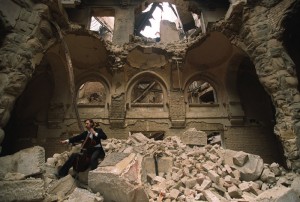 On April 5th 1992 units of the Yugoslav People’s Army on orders from Serbian leader, Slobodan Milosevic, in combination with Bosnian-Serb militia groups, took up positions in the hills surrounding the Bosnian capital, Sarajevo. From there they opened fire on the city below with artillery, mortars and sniper rifles. It was the beginning of a three and a half year siege that left many thousands dead and heralded the disintegration of Yugoslavia in a decade-long series of conflicts, bringing to an end Tito’s dream of unifying the Balkans.

Of course, by the time it laid siege to Sarajevo, the Yugoslav People’s Army was already an anachronism. Yugoslavia had begun to fragment some years earlier; the process being set in motion by the death of Tito in 1980. For almost forty years a lid had been kept on the religious and ethnic tensions in the Balkans… a remarkable achievement by the Yugoslavian government for all its faults and transgressions – of which there were many. Unfortunately, the twin pillars upon which this fragile union had been supported both disappeared in the early 80s. Firstly, the sheer force of will (and attendant cult of personality) of Marshall Tito and secondly, the strict doctrine of his communist party.

With Tito’s death, and without an adequate replacement, that first pillar began to crumble. Simultaneously the Reagan administration adopted a strategy of undermining the Yugoslavian communists despite their longtime policy of engagement with both East and West. In Reagan’s black-and-white view of the world, any communist or socialist regime was regarded as an enemy to be vanquished and, with the help of the IMF, his economic assault on Yugoslavia during the 1980s helped prepare the ground for what was to come.

This is not an attempt to deflect blame from Slobodan Milosevic and his cronies. Far from it. But just as The Treaty of Versailles set the stage for the rise of fascism in 1930s Germany, so the role of Western economic policies must be acknowledged in the rise of Serbian ultra-nationalism in the 1990s. Otherwise we learn nothing from history and may find ourselves doomed to repeat it.

After the second world war, Marshall Tito recognised the great internal stresses in his pan-Balkan Yugoslavia. In response he declared nationalism to be one of the great political crimes and insisted that the Partisan slogan, “Brotherhood and Unity”, be a cornerstone of Yugoslavian communism. Serbian, Croatian, Bosnian and Montenegrin nationalists all found themselves breaking rocks along with unrepentant Stalinists on the prison island of Goli Otok. There is a school of thought that suggests this harsh treatment of separatists merely forced nationalist sentiment to fester beneath the surface of Yugoslavian society and made its re-emergence all the more violent. Others believe that the suppression of nationalism simply wasn’t given enough time. They point to the significant integration of Bosnian, Serbian and Croatian populations under Tito; the widespread inter-marrying and the numerous mixed communities… making the subsequent conflicts all the more cruel of course. Would another couple of generations of integration have eliminated those tensions? Had the bitter memories of the atrocities of the second world war been allowed to fade, would Milosevic have been able to exploit Serbian nationalism and drag the Balkans into violence?

Sadly, we’ll never know. With the death of Tito and the economic collapse of the 1980s, the federation began to fragment. Slovenia, Croatia and Bosnia all began to make moves towards independence and Milosevic began to arm and finance Serb milita groups in Bosnia. Despite his communist background, it quickly became apparent how little belief he had in the principles of Yugoslavian communism and how much he sought power as an end in itself. That famous line from Einstein – “Force always attracts men of low morality, and I believe it to be an invariable rule that tyrants of genius are succeeded by scoundrels” – captures perfectly Yugoslavia’s transition from Tito to Milosevic.

Whipping up anti-Muslim sentiment among Bosnian-Serbs and reminding Croatian-Serbs of their treatment at the hands of collaborators during World War 2, by late 1991 Milosevic had tapped into, and amplified, a mass psychosis within Serbian society. He gave speeches calling for the establishment of a Greater Serbia, a new state that would include significant portions of Bosnia and Croatia. He purged the Yugoslav People’s Army army of non-Serbs and massively increased his support for the nationalist militias. So that by the time the Bosnian referendum calling for independence was passed in February 1992, there was little doubt that it signalled the beginning of a nightmare. Bosnian Serbs, who made up about a third of the population and had boycott the referendum, declared an autonomous Serbian Republic in the north and east of Bosnia. Simultaneously Bosnian Croats declared an autonomous republic in the west. Arms and troops flooded across the borders from both Croatia and Serbia, though Milosevic’s control of the former Yugoslavian army gave him an distinct advantage.

By the end of March 1992 the situation was chaotic. What started with political assassinations and attacks upon strategic targets soon descended into outright war. And worse. That terrible phrase, “ethnic cleansing”, entered the lexicon of the western media. Muslims were driven out of both Serb and Croat areas and atrocities were carried out by all sides. But it was the Serbian militia groups led by Radovan Karadzic who perpetrated the worst of the massacres. Whether you call it “psychotic” or instead reach for the word “evil”, the ultra-nationalist fervour that gripped the Serb militia in Bosnia resulted in some of the most heinous acts committed on European soil since the defeat of the Nazis. And while some may speak of the Prijedor or Srebrenica massacres, it was the siege of Sarajevo that came to symbolise the campaign of genocide and terror.

Sarajevo was one of the most integrated cities in the entire Balkan region. It is a bitter irony, but one that does nothing to lessen the horror of what happened. Through marriage, my own family includes a Serbian woman whose Muslim husband died during the siege. So while the siege of Sarajevo involved Serbian forces attacking a Bosnian city, on another level it was the vicious response of narrow-minded nationalism to a society that sought to move beyond it.

More than ten thousand civilians were killed and almost sixty thousand badly injured during the years the city was under siege. It would be an insult to every single one of them to try to break those numbers down into ethnic or religious groups. The artillery shells may have come from Serbian gun emplacements, but they did not discriminate upon impact. The siege of Sarajevo was carried out by Serbian forces, but the lessons to be learnt – about the dangers of nationalism, the ease with which perceived grievances can be whipped into frenzied violence by those in power, and the insanity of demonising The Other – are lessons that should be learnt by us all.