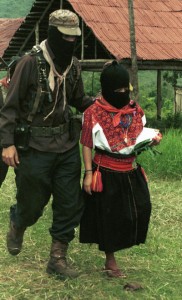 Today we pay tribute to Comandante Ramona – the diminutive, barely literate peasant-turned-revolutionary leader and heroine – who died on this day 2006 at the age of 47 following a decade-long battle with cancer. A high-ranking officer of Mexico’s Zapatista Army of National Liberation (EZLN), Comandante Ramona’s simplicity and integrity cast her as a role model and beacon of hope to millions of women, especially her indigenous sisters of Chiapas – the poverty-stricken province of southern Mexico where since 1994 the Zapatistas have been waging their anarchist war against the Mexican government and indigenous exploitation. A Tzotzil Mayan Indian whose pre-revolutionary identity has never been revealed, Ramona was and remains a Mexican icon – her status comparable to that of the most internationally recognised Zapatista, Subcomandante Marcos. Dressed always in traditional native clothing and a revolutionary balaclava masking her face, this humble woman was the EZLN’s “secret weapon” with her strikingly powerful and challenging image. But her small stature and gentle exterior belied her true character: said to be the most belligerent, aggressive and intransigent of all the Zapatistas, it was Comandante Ramona who – on horseback –  led the military charge on San Cristóbal during the EZLN’s uprising in January 1994. It was Ramona who – even before the uprising – undertook the immense and groundbreaking task of consulting with indigenous communities on the status of oppressed women and the vision they had for the future. It was she who represented the Zapatistas during peace talks with the Mexican government. And, when the Mexican authorities forbade the EZLN from participating in the National Indigenous Congress in Mexico City in 1996, an exception was made for the gravely ill Ramona; without the means for a kidney transplant, attending the Congress was her dying wish. Zapatista sympathisers from all walks of life formed a security escort around the Comandante to ensure she was not arrested as she traveled to Mexico City. And there, before a 100,000-strong crowd who showered her with flowers and chanted her name, she spoke slowly and tentatively in Spanish – so different from her native Tzotzil language – calling for solidarity, strength and courage. The sight of this brave and frail woman defiantly shouting “Ya Basta!” (Enough is Enough!) catapulted her onto the world stage: the media dubbed her “The Petite Warrior”, and the Mexican government grew so fearful of her emblematic power that in 1997 they cynically spread false information that she had died. When her public appearances proved otherwise, in a further attempt to undermine her influence, authorities publicly accused the Zapatistas of using a “double.”

In 1996, soon after her celebrated speech in Mexico City, Ramona received a life-saving kidney transplant paid for by supporters who sent in donations following an internet campaign. Basic health care and facilities had been one of Ramona’s most militant crusades; in her own village, people had to walk twelve miles for medical treatment. When her kidney failed on January 6th 2006, Comandante Ramona was forced to undertake the long and arduous journey to the nearest hospital. She died in transit. “The world has lost one of those women it requires,” Subcomandante Marcos said, fighting tears, as he announced her death. “Mexico has lost one of the combative women it needs and we, we have lost a piece of our heart.”

3 Responses to 6th January 2006 – the Death of Comandante Ramona