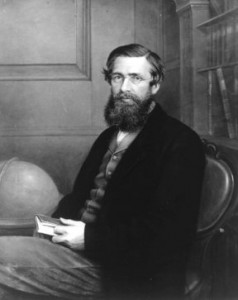 How and why do species change? Why do some occur in some places, but not in others? Why do they die out? These big questions didn’t scare intrepid British explorer, biologist and geographer Alfred Russel Wallace, who died 101 years ago today aged 90. He wanted answers.

Wallace’s achievements have since been obscured by those of Charles Darwin. But be in no doubt: it was Wallace who prompted Darwin to finally – reluctantly – publish his theory of evolution by natural selection. Why? Because Wallace had come up with the very same idea. But for a quirk of fate what the world now understands as ‘Darwinian’ could well have been ‘Wallacean’.

Darwin was a posh boy with a private income, but Wallace was working class and had to earn his crust. As a surveyor he could indulge his passion for insect-collecting. But aged 25, he put down his theodolite and, inspired by Darwin’s early accounts of his travels on HMS Beagle, set out to collect specimens to supply museums and private collectors. In 1848 he journeyed to South America, spending four years deep in the jungle, discovering fantastic new creatures. On his way home all was lost in a shipwreck. This would have most of us weeping into our beer, but Wallace was undeterred. He would go east this time, to the Malay archipelago, today’s Indonesia. One day, lying in bed, sweating with fever, unable to do the dirty, stinking work of pinning butterflies and skinning birds, he had time to think about why some things survive and others don’t. He wrote:

“… the answer was clearly, on the whole the best fitted live … and … it followed that all the changes necessary for the adaptation of the species to the changing conditions would be brought about.”

In other words, only the best adapted things would survive. Darwin later called this ‘natural selection’. Thrilled by his brainwave, Wallace wrote to Darwin, with his radical thoughts. Darwin had had precisely the same idea twenty years before and was too afraid to reveal it. Now, he had to publish those notes he’d hidden in a package under the stairs or Wallace might steal his thunder. He published.

Quite apart from independently hitting on a theory of evolution, Wallace made many ground-breaking scientific observations. He practically invented biogeography – the study of the distribution of species. His works The Geographical Distribution of Animals, published 1876, and Island Life, 1880, were the must-read texts in this discipline for the next 80 years.

As if this lot wasn’t enough to keep him busy, he was a radical socialist campaigning for land ownership reform, opposing militarism and vigorously fighting for the rights of women. Right on!

As a species, modern homo sapiens would do well to rediscover the sheer joy of the natural world. Here’s Wallace describing how he felt when he captured a new butterfly (Ornithoptera croesus):

“The beauty and brilliancy of this insect are indescribable… on taking it out of my net and opening the glorious wings, my heart began to beat violently, the blood rushed to my head, and I felt much more like fainting than I have done when in apprehension of immediate death. I had a headache the rest of the day, so great was the excitement produced by what will appear to most people a very inadequate cause.” From The Malay Archipelago, 1869

So goodbye dodo, cheerio Yangtse river dolphin, so long thylacine, see ya quagga. Today in an age of mass extinctions, Wallace’s discoveries about how the natural world came to be as it is seem more pertinent than ever.