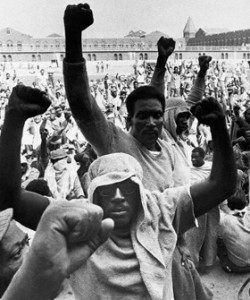 On this day in 1971, in the so-called liberal state of New York, the white authorities of Attica State prison – desperate to restore some semblance of order amongst the concentration camp-like conditions they’d imposed upon their primarily African-American inmates – embarked on a murderous and racist policing so brutal, so terminal and so careless of the lives of the innocent hostages, that their end-game proved to the world what Malcolm X had asserted in his autobiography1: that the so-called liberal white Northerner was no less racist than his Southern opposite number, just more devious in the manner in which he controlled “the Negro”.

As the Black Revolution gathered ever-increasing momentum in the wake of the deaths of Martin Luther King and Malcolm X, America’s criminal justice system – apparently clueless to the implications – chose to deal with its black activists not by isolating them all, but instead by herding them together alongside true hoodlums and everyday criminals. Utterly crazy. Within months, every prison with a politicised African-American presence had been rendered into a revolutionary cell. And when the foolishness of this short-sighted policy began to unravel on 9th September 1971 the callous authorities cynically responded with as many bullets as it took to bring them victory.

How had it come to this? Three months earlier, the inmates of Attica had issued a manifesto condemning their inhumane conditions and brutally racist treatment at the hands of their all-white correction officers. Segregated even in the violence they received, black prisoners were regularly assaulted with ‘Nigger Sticks’ – especially cruel night sticks reserved solely for them. So institutional and methodical was the racism that the Attica staff had even invented demeaning titles for jobs given exclusively to high-profile black prisoners. Tensions at Attica mounted further on 21st August, when inmates learned that the Black Panthers’ high-profile leader George Jackson had been murdered in California by San Quentin prison authorities.

Now, in Attica’s seething pestle of pent-up frustration and anger, came the prison authorities’ opportunity to manage the situation with the utmost care. Instead, however, their decision to move two inmates into solitary confinement triggered a sudden and immediate revolt. More than 1,000 of the prison’s 2,200 inmates seized control of the prison. Holding forty guards as hostages, they now issued their many demands, including: 1) federal takeover of the prison, 2) better living conditions, 3) better sanitation, 4) fair visiting rights, 5) better food, 6) amnesty for the crimes committed during the revolt and 7) the removal of the prison’s superintendent. In their statement, the leaders of the rioters criticized the “unmitigated oppression wrought by the racist administrative network of this prison throughout the year,” and the “ruthless brutalisation and disregard for the lives of the prisoners here and throughout the United States.”

New York’s Governor Nelson Rockefeller responded to their demands with absolute silence. For four days, however, a neutral team of senators, journalists and civil rights lawyers negotiated with the rioters, but Nelson Rockerfeller’s refusal to visit the prison was seen by the negotiators as evidence of his opposition. How right they were! For throughout those talks, the authorities had been digging trenches and installing electrified metal gates. On 13th September, seemingly out of the blue, Governor Rockefeller ordered the prison’s re-taking.

A state police helicopter commenced proceedings by dropping tear gas over the exercise yard and walkways where the inmates were holding the hostages. Within six minutes, 2,200 lethal missiles had been discharged. The use of shotguns, with their imprecise range, increased the bloodshed, and ten hostages and twenty-nine inmates were killed in the carnage. The inmates were then ordered to strip naked, lie down in the mud and crawl back to their cells while the authorities beat them with their “nigger sticks”.

Caught on film and reported throughout the world, the Attica State prison riot beamed a terrible, terrible warning. For this dreadful event – ‘the bloodiest prison confrontation in U. S. history’ – had taken place over a thousand miles from the homes of racist Southerners. Malcolm X’s warning message was now understood and being broadcast across the world: Integration in the USA was just as unlikely in the cosmopolitan, industrialised North as in the cotton-picking South.

1 The Autobiography of Malcolm X