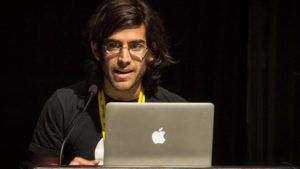 Aaron Swartz – a prophet of the Information Age

Every age has its prophets – those Visionaries and Revolutionaries whose ideas and actions inform us of where we are and anticipate where we’re heading. Aaron Swartz was a prophet of the Information Age. As a child prodigy technological genius – and before most of us even had a dial-up connection – Swartz was creating codes and concepts that would shape the online era. In 1999, aged 12, he founded The Info Network – a precursor to Wikipedia. At 14, he developed the RSS syndication software; if you subscribe to podcasts or websites and receive automatic updates, you can thank Aaron Swartz. At 15, he helped write the code for Creative Commons, which revolutionised the way people can licence and share their work online. At 19, he co-developed Reddit, one of the world’s most popular sites, and one whose aim to provide user-controlled community-led discussion boards for just about any topic is quintessentially Swartzian.

But Aaron Swartz’s foresight was not limited to his pioneering tech contributions. He also helped create the egalitarian philosophy of the Internet: the notion that information should be free. Aaron Swartz advocated a better world through open access. He understood, equally, the potential for authorities and corporations to manipulate, censor and control the Internet. With these fears in mind, Swartz’s interests moved from technology to political activism, where he quickly became an important bridge between those two worlds: Aaron Swartz could identify areas of online injustice, plus he had the skills to do something about it. So when Swartz learned that the U.S. government unfairly charged a fee to access public-domain court records, Swartz liberated these files – an estimated 20% of U.S. law – by moving them all onto a free website. He created Watchdog.net for people to organise against Internet suppression. He founded the online group Demand Progress and led the campaign against two U.S. government bills (SOPA and PIPA) that would have effectively legalised censorship. “Information is power. But like all power, there are those who want to keep it for themselves,” Aaron Swartz warned. His zealous commitment to a free and open Internet would, however, come at a very, very heavy price.

In November 2010, Swartz hid a laptop in a basement cupboard, plugged it into the computer network at the Massachusetts Institute of Technology, and surreptitiously downloaded millions of academic articles from a subscription-only archive called JSTOR. Swartz believed that this knowledge – locked behind a private company’s paywall – should be freely available to all. Needless to say, Swartz received no remuneration for these actions. In January 2011, however, Swartz was discovered, arrested and charged with computer fraud. What followed was a merciless witch-hunt. JSTOR itself didn’t pursue charges – they even asked the government not to prosecute. But this was the time of WikiLeaks and the Anonymous collective of hacktivists, who were scaring the shit out of the U.S. government. Federal prosecutors from the Obama administration were determined to make an example of Swartz, and indicted him for 13 felony charges. Found guilty, he would have faced thirty-five years in prison and a million-dollar fine. Who would have thought that downloading academic articles could result in such a disproportionately harsh punishment? Despite being warned that Swartz was a suicide risk, his prosecutors refused all settlement offers that did not include jail time. Hounded by the FBI, bankrupt from legal fees and overwhelmed by the prospect of prison, Swartz hanged himself in his Brooklyn apartment whilst awaiting trial. He was 26.

And so the world was robbed of a brilliant young man – a Prophet, freedom fighter, scapegoat, martyr, Swartz died standing for those same generous democratic principles that had created our public libraries. He believed information should be freely available. He believed a more open world was a better world, declaring:

“There is no justice in following unjust laws. It’s time to come into the light and, in the grand tradition of civil disobedience, declare our opposition to this private theft of public culture.”

Within weeks following Aaron Swartz’s death, his actions against the privatisation of knowledge were vindicated when 15-year-old Jack Andraka discovered a breakthrough test for pancreatic cancer. Andraka credited his discovery to free access to online journals, which he used “religiously” because “in most online databases [like JSTOR], articles cost about $35.”

Aaron Swartz was right about a lot of things. We need to stay vigilant to ensure that the control of the Internet is not taken away from us by state and corporate