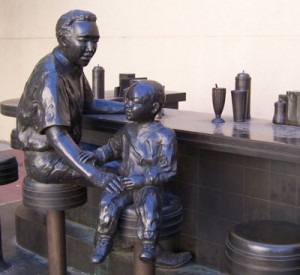 On this day in 1958, the owner of Kansas’s state-wide Rexall drugstores walked into Dockum’s, his flagship store in downtown Wichita. Observing a group of young black students sitting peacefully at the lunch counter, after several minutes of consideration, he said to his store manager: “Serve them. I’m losing too much money.” Thus successfully ended the first-ever sit-in of the civil rights movement.

Despite a state law passed in 1874 prohibiting segregation, Kansas nevertheless largely subscribed to the Deep South’s repugnant view of blacks. Wichita, near the Oklahoma border, was an exceptionally segregated community. Although the city’s establishments adhered to the law and did not display signs proclaiming their policies, blacks were ‘politely’ told that their custom was not welcome. The lunch counter of the downtown branch of Dockum Drug Store was the most popular daytime eatery. Under the drugstore’s unofficial policy, blacks were not allowed to sit at the counter to be served; instead, they ordered from a special window and then took their food outside.

Two black college students, Ron Walters and Carol Parks – President and Vice President of the Youth Council of the Wichita chapter of the National Association for the Advancement of Colored People (NAACP) respectively – conceived of the idea of a ‘sit-in’ to put pressure on Dockum to integrate. The NAACP advised against the proposal, preferring legal means to direct action. Nonetheless, Walters and Parks determined to execute the plan and set about recruiting others to join them. Forty students agreed, and for several weeks, Walters – taking inspiration the victorious Montgomery Bus Boycott – trained the students to ignore taunts, no matter how provocative, and to at all times behave with dignity and purpose.

On 19th July 1958, several black students entered Dockum Drug Store, sat down at the lunch counter, and remained there – without being served – from lunch until after the dinner hour. This pattern would continue on Tuesdays, Thursdays and Saturdays for the next three weeks. The students were never served. They endured constant verbal abuse. Gangs of white hoodlums threatened bodily harm. The local newspapers ignored the protest – too chicken to offend such a lucrative advertiser as Dockum. And all the while, the police turned a blind eye.

But still, the students persisted. For three weeks they held their nerve and took their places at the lunch counter. And finally, at 10 o’clock on the morning of 11th August, they triumphed. They celebrated by ordering, and being served, coca colas. The very same day, all the stores of the Rexall chain were desegregated. It had been a state-wide victory. The students had pioneered what would soon become a powerful tactic in the battle for civil rights – a public display of determination, dignity and tenacity. Nineteen months later in Greensboro, North Carolina, by which time the NAACP had bowed to pressure and endorsed sit-ins, blacks would employ this very tactic to catapult the civil rights movement to the top of America’s social agenda.

Overshadowed by events at Greensboro – which received massive national media coverage – it was not until 2006 that the NAACP formally recognised the Wichita protesters as the originators of the civil rights movement’s sit-ins. Ron Walters has gone on to enjoy an illustrious career as an educator in African American history and politics – but his Wikepedia entry mentions nothing of his contribution to altering American history.