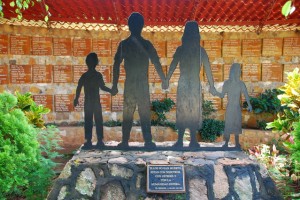 Today we recall the 1981 El Mozote Massacre – the largest killing of civilians during El Salvador’s brutal twelve-year civil war – in which nearly the entire 800-plus population of the small village of El Mozote and its surrounding hamlets was executed by a U.S. trained and equippped counter-insurgency force. This bloodbath, spearheaded by the elite Atlacatl Battalion, was undertaken as part of the Salvadoran Army’s “Operation Rescue”, which sought to force the leftist Frente Farabundo Martí para la Liberación Nacional (FMLN) guerrillas from the area and eliminate its supporters among the civilian population. But there was no good reason to attack the deeply Christian and non-political village of El Mozote. When the Atlacatl Battalion arrived on the night of 10th December 1987, they ordered the terrified residents to stay locked in their houses and warned that anyone who didn’t would be shot. The next morning, the soldiers separated the men from the women and children and imprisoned them in isolated groups. The men were the first to be interrogated, tortured, and executed – most by machine guns, others beheaded. The next victims were the women and older girls, most of whom were raped – some of these girls were as young as 10 – before they too were machine-gunned to death. Finally, the youngest children who’d been locked in the church and its convent were shot through the windows before all the buildings in the village were burned down. Only one village woman survived the massacre. Over the next few days, the soldiers repeated the same procedure in five other nearby hamlets.

This tragedy became known to the world on January 27th, 1982, after three American journalists were tipped-off by the FMLN. The journalists interviewed the few survivors and took photographs of the gruesome evidence. The Reagan administration – determined to preserve U.S. support for El Salvador’s war against the leftist revolutionary insurgents – downplayed reports of the massacre, deflecting the evidence that hundreds of unarmed women, children and men were shot, hung or beheaded. The incident sparked heated conflict in the U.S. Congress, where the renewal of military aid to El Salvador was already the subject of controversy. Both the Salvadoran government and the U.S. State Department acknowledged that a military operation had occurred in the area, but insisted what transpired in El Mozote had been a battle between the Salvadoran Army and the FMLN with no evidence of a “massacre”. Reports to the contrary were discounted as FMLN propaganda. And as Reagan continued to defend the notion that the Salvadoran government was guaranteeing the human rights of its people, Congress voted to renew military aid.

For eleven years, the U.S. government denied the truth while the three reporters defied intimidation and steadfastly stuck to what they’d witnessed. The journalists – and the victims – were finally vindicated in 1992 when a United Nations-sanctioned Commission on the Truth for El Salvador stated in its final report that there was full proof that the entire population of El Mozote and its surrounding hamlets had been deliberately and systematically massacred. Despite this, no one has ever been tried or convicted for these horrendous acts of human rights abuse that comprised one of the worst massacres in Latin American history.

As for the U.S. government’s unscrupulous and self-serving role in this tragic event, author Mark Hertsgaard perfectly summarised the paradoxical politics of Cold War America when he wrote:

“What made the [El Mozote] massacre stories so threatening was that they repudiated the fundamental moral claim that undergirded US policy. They suggested that what the United States was supporting in Central America was not democracy but repression. They therefore threatened to shift the political debate from means to ends, from how best to combat the supposed Communist threat — send US troops or merely US aid? — to why the United States was backing state terrorism in the first place.”