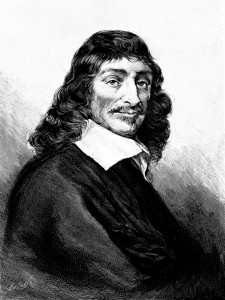 Today, on the anniversary of his death in 1650, we remember the life and work of French philosopher and mathematician, René Descartes. Although not overtly political, the work of Descartes succeeded in redefining much of philosophical thought, to the extent that it would be more than fair to describe him as a revolutionary thinker. And while many of his ideas have antecedents in ancient Greece, Descartes can stake as firm a claim as anyone to the epithet, “father of modern philosophy”.

In March 1596, René Descartes was born in a small French town called La Haye en Touraine. You won’t find the name on any modern map as the town was later renamed Descartes in his honour; an indication of his great historical importance. His mother died when he was still an infant and the young René was raised partly by his politician father and partly by the Jesuit Order into whose care he was placed at the age of eight. In accordance with the wishes of his father, René studied hard and received a law degree, at which point he turned his back on the career for which he was being groomed and decided instead to see the world.

He wandered Europe and thanks to a combination of education, a sharp mind and an engaging personality, found few doors closed to him. He socialised with beggars and aristocrats and was equally at home in the court of a prince as he was in a seedy dockside tavern. He joined the Dutch army to fight against the Spanish, and later fought alongside the Spanish on the side of the Holy Roman Empire in the 30 Years War.

It was at that time, on the night of the 10th of November 1619, that Descartes experienced the “three visions” that were to so profoundly affect his later life. Today we can speculate as to the cause of these visions and the radical shift they produced within him. Certainly they bear many of the hallmarks of post-traumatic stress and coming just two days after the bloody Battle of White Mountain in which 5,000 men died in close combat and many thousands more were maimed, it does not take a qualified psychoanalyst to link the events. Nonetheless, Descartes viewed the visions as a divine message to end his “life of adventure” and make the methodical pursuit of truth and wisdom his goal.

With no firm boundaries between the sciences and philosophy at the time, Descartes decided that he would sift through every field available to him and discover the unifying truths that lay beneath them all. He aimed to unite physics and mathematics, and while his philosophical treatises remain essential reading for any undergraduate in the subject, it is surely his development of the Cartesian co-ordinate system that has had the most lasting cultural impact. Descartes established the standard notification for algebra we still use today and created the method by which algebra could be represented geometrically. Rarely has one man so completely revolutionised such an important field of study and it is genuinely difficult to overestimate the impact he has had on the subsequent evolution of Western civilisation.

Good sense is the most evenly shared thing in the world, for each of us thinks he is so well endowed with it that even those who are the hardest to please in all other respects are not in the habit of wanting more than they have.

Thus opens Discourse on Method, which along with The Meditations (he would later fuse the two books into a single volume, Principles of Philosophy), makes up Descartes’ two-pronged assault on the contemporary philosophy of his day. It’s difficult to dislike any book with such a wry first line. And it is within the pages of Principles of Philosophy that we find not only his most famous line, but arguably the most famous line in the history of philosophical thought, I think, therefore I am.

In Cartesian philosophy, all other knowledge must both rest upon and flow from that foundation; what Descartes saw as the Primary Truth. But of course, the world has had more than 350 years to digest the statement and it has been – along with all of Cartesian philosophy – robustly challenged in that time. Indeed, while modern philosophy acknowledges the great debt it owes to Descartes, his work has become almost an ancient artefact rather than a living part of the subject. He tends to be presented to modern students in the context of “finding the flaws” and while it would be naive to attempt to defend the entirety of his work, I do believe in that respect he is being done a disservice.

Now, I admit my own interpretation of Cartesian philosophy falls some way outside the mainstream, but I believe his present-day reduction to an historical footnote is due to a failure to appreciate just how radical his work truly was. Despite the standard view of Cartesian dualism as a proposition about the strict separation of mind and body, I would argue that it is within the work of Descartes that we see the first steps towards a far more subtle relationship between the two and the advancement of a theory that actively undermined the prevailing dualistic view of the time.

His “ontological proof” for the existence of God and avowed Catholicism are well known, and he certainly found himself reaching for the word “God” to provide him with a First Cause. However it must be remembered that Descartes was a contemporary of Galileo and was forced to shelve a book, Treatise on the World he’d spent four years working on as he was convinced it would see him persecuted. Indeed, for all his talk of God – and there is plenty of it – Descartes was accused of atheism, found his work outlawed by the Catholic Church and was denounced by no less than Blaise Pascal for “doing his best to dispense with God”. The work of René Descartes contains the profound and aching inability of a man to reconcile his inner beliefs with the oppressive imposition of the values of his society.

Which is no wonder, for we also find within Discourse on Method the seeds of cultural relativism, a philosophy that remains radical and subversive in much of the world even today. He also discusses, probably for the first time, the interactions between the conscious and unconscious mind in a manner that provides an essential bridge between the earlier work of Plato and the later Freud.

None of which is meant to suggest that we cannot find plenty worthy of criticism within the life and work of Descartes. His justification of live vivisection hardly stands proudly alongside his other more enlightened views, for example. But none of us can completely escape the values of our time and place. We are all, to a greater or lesser extent, captives of history. Descartes, however, did a better job than most at throwing off some of those bonds. More than that, he explicitly identified those bonds in a way that I’m not sure anyone had ever done before him.