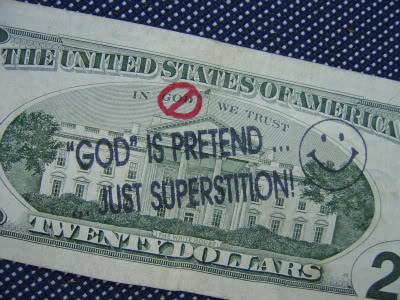 On 11th July 1954, the U.S. Congress enacted Public Law 84-140, which decreed that “In God We Trust” would henceforth appear on all American currency. This pious new motto was a direct violation of the First Amendment – the separation of Church and State – which had been central to the framing of the Constitution, a deliberately and painstakingly secular document. The founding fathers had chosen a secular national motto: “E Pluribus Unum”, or “Of many, One”. They’d cautioned again and again about the need for State to be entirely separate from Church: as Thomas Jefferson put it – a “wall of separation”; as James Madison put it – a “perfect separation.”

But in the mass hysteria of 1950s McCarthyism, Congress was determined to set the United States apart from those “godless communists.” In addition to changing the currency, further federal laws evoking this supposedly shared American God were evangelically implemented over a frenzied five-year period. Out went the noble “E Pluribus Unum” and in came “In God We Trust” as the new national motto. “Under God” was inserted into the Pledge of Allegiance. And “So help me God” was added to federal oaths – despite the fact that the Christian Bible clearly states not to swear by God or any other person, place, or thing when taking an oath.

To those who dared voice objection – primarily Jews, who felt certain that this “God” they were all meant to trust was not Yaweh (nor was it Allah, Vishnu, and certainly not female) – President Eisenhower declared that if people disagreed with “In God We Trust” then their own patriotism should be challenged.

It is, however, this absurd, meaningless motto in violation of Americans’ most basic and fundamental rights that should in fact be challenged.

While America’s wacky Christian Right continues its incessant campaign to put its supporters on the federal courts where they can make a mockery of core constitutional principles, every American dollar and coin bearing this motto reflects its government’s irrationality, promotes ignorance and blind acquiescence of its citizens, and condones the destructive influence of religion in the modern world.

Only in Truth and Reason should we Trust!