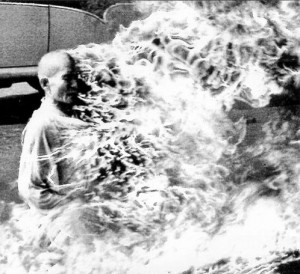 On 11th June 1963, 67-year-old Buddhist monk Thích Quảng Đức sat down in the lotus position at a busy crossroads in Saigon, doused himself in petrol, lit a match and burned to death. This spectacular public act of self-immolation in protest against the South Vietnamese government’s persecution of Buddhists sent shockwaves throughout the Western world, galvanising judgment and triggering alarm bells that – despite the American government’s assurances – all was not tickety-boo in Vietnam. The burning body of Thích Quảng Đức remains one of the most singularly vivid images of the 20th century. So just what caused this Most Venerable Buddhist monk to sacrifice his life so spectacularly?

French colonists had long favoured Indochina’s minority Roman Catholic population and had passed several punitive laws discriminating against Buddhists. In the wake of France’s withdrawal, the Buddhist position worsened under South Vietnam’s first president, Ngô Đình Diệm – a devout Roman Catholic authoritarian and American stooge. A full-fledged crisis was sparked on May 8th 1963 in the central city of Huế by the shootings of nine unarmed civilians protesting a national ban of the Buddhist flag. Diệm blamed the deaths on communist terrorists, but the barefaced lie fooled no one.

Buddhist leaders demanded an end to religious oppression. Diệm refused to respond. As tensions mounted, on 10th June a spokesperson for the Buddhists privately informed US journalists that “something important” would happen the next day on the road outside the Cambodian embassy in Saigon. The few reporters who bothered to turn up bore witness to an elaborate ceremony as 350 Buddhist monks and nuns marched in two phalanxes carrying protest banners. Thích Quảng Đức emerged from a car along with two other monks, who placed a cushion on the road. As the marchers formed a circle around him, Quảng Đức chanted a prayer to the Amida Buddha before striking a match. He remained eerily still and composed amid the flames.

The unprecedented television coverage of the Vietnam War brought the brutal realities of human conflict into the world’s living room for the first time, but few images would shock the world more than Thích Quảng Đức’s suicide-protest. President John F. Kennedy said that “no news picture in history has generated so much emotion around the world as that one.” Many Americans viewed Thích Quảng Đức’s act as a demonstration that Vietnamese lacked the most cherished of American liberties: freedom of religion. Such was the outrage that officials genuinely feared that it would lead to the end of Diem’s reign and the US effort to combat communism in Vietnam.

The global outrage, however, did not compel Diệm to end his persecution or even meet with leading Buddhists. In August, Diệm used regular troops to arrest and imprison more than one thousand Buddhists in Hue and Saigon. Protests spread, and Quảng Đức’self-immolation was followed by similar acts. People around the world began to question a regime that would oppress peaceful Buddhists and provoke such shocking sacrifice. The U.S. government found it increasingly difficult to continue its support of the man they had put in power. The JFK administration demanded that Diệm find a way to end the protests. Diệm refused, outrageously claiming yet again that communist infiltration lay behind the Buddhist protests. The Americans lost patience. On November 1st 1963, the CIA orchestrated a coup against the no-longer-useful Diệm. He was assassinated the following day.

For his extraordinary martydom, Thích Quảng Đức was deemed a bodhisattva – an enlightened being who delays nirvana to help those in need. And that he did. His heroic act precipitated the end of Diệm’s oppressive reign, and the regimes that followed pledged to accommodate the Buddhists.