11th May 1846 the Commencement of Manifest Destiny 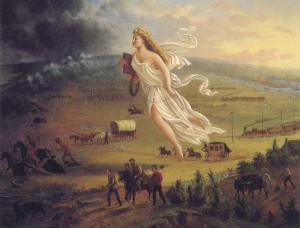 On 11th May 1846, the 11th president of the United States, James Polk, asked Congress to recognise the existence of a war with Mexico triggered by America’s annexation of Texas. Two days later, war was officially declared and thus began the Mexican-American War – the first American military conflict incited exclusively by the concept of “Manifest Destiny”, the widespread belief that it was America’s inevitable God-given right and missionary duty to expand its borders. America of course was not the first country to have a policy of expansionism – and had itself been expanding at an alarming rate since the early 1800s, most infamously with the dispossession of the Cherokees who were force-marched from Georgia to Oklahoma in the so-called “Trail of Tears”. But at the outbreak of the Mexican War, expansionists seized upon the phrase “Manifest Destiny” – coined by journalist John O’Sullivan in an 1845 news article – to legitimise the government’s pursuit of its ambitions to extend America’s borders from ‘sea to shining sea’ both aggressively and evangelically. At the end of the two-year conflict, Mexico had lost 55% of its pre-war territory, ceding to America all of present-day California, Nevada and Utah as well as most of Arizona, New Mexico and Colorado, and acknowledging the loss of Texas. Through blood spilling, robbery and low-down expediency disguised as noble principles, America had increased its size by a third – prompting one of its most famous military heroes, Ulysses S. Grant, to comment: “I do not think there ever was a more wicked war than that waged by the United States in Mexico … and to this day regard the war, which resulted, as one of the most unjust ever waged by a stronger against a weaker nation. It was an instance of a republic following the bad example of European monarchies, in not considering justice in their desire to acquire additional territory.”

Under the cloak of Manifest Destiny, Americans believed its expansion would nobly spread freedom and democracy – except to the Indians, who they continued to murder and steal from, and the blacks who were slaves. Less than a hundred years later, Adolf Hitler’s ideas of Lebensraum sought to kill or deport the Polish, Russian and other Slavic populations to the east of Germany – whom the Nazis considered inferior  – and to repopulate these territories with superior Germanic people who required the extra living space. So what’s the difference?

3 Responses to 11th May 1846 – the Commencement of Manifest Destiny