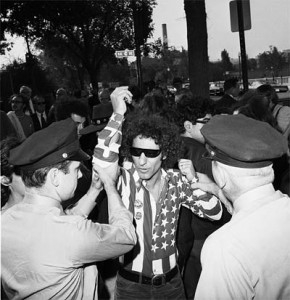 Today we commemorate everyone’s favourite Groucho Marxist – the radical activist, Abbie Hoffman. Co-founder of the Yippies and author of Steal This Book and Revolution for the Hell of It, Hoffman was one of the most colourful and iconic figures to emerge from the 1960s revolution and remains an enduring symbol of that era. His enigmatic mix of buffoonery, political theatre and media savvy marked him for the elite ranks of the New Left, whilst his high-profile protests – attempting to levitate the Pentagon, orchestrating a feeding frenzy at NYC’s Stock Exchange by hurling fistfuls of fake dollars onto the floor, the decade-defining Chicago Conspiracy Trial, and the infamous bust-up with Pete Townshend on stage at Woodstock – cast him as pied piper to millions of young people opposed to the Vietnam War and ensured an enduring revolutionary legacy.

But behind the theatrical guerrilla antics, Abbie Hoffman was a man of real and serious convictions who grew despondent as the idealism of the 1960s gave way to assimilation and  ennui. Hounded relentlessly by the FBI’s sinister COINTELPRO and forced underground for six years, by the time Hoffman came out of hiding in 1980, the counter-culture was dead. Even his erstwhile comrade Jerry Rubin had defected from Yippie to Yuppie. But Hoffman’s own convictions were not zeitgeist reliant. He unwaveringly continued to fight for his principles, regularly writing and lecturing about the FBI and CIA’s covert and illegal activities, and hitting the university circuit to deliver his message to a new generation:

“It is always the young that make the change. You don’t get these ideas when you’re middle-aged. Young people have daring, creativity, imagination and personal computers. Above all, what you have as young people that’s vitally needed to make social change, is impatience. You want it to happen now. There have to be enough people that say, ‘We want it now, in our lifetime.’ This is your moment. This is your opportunity. Be adventurists in the sense of being bold and daring. Be opportunists and seize this opportunity, this moment in history, to go out and save our country. It’s your turn now.” – Abbie Hoffman, Speech to the First National Student Convention, Rutgers University, February 1988

The betrayal of his own generation was, however, a literal death-blow. For nearly a decade, Hoffman had suffered from manic depression and, twenty-three years ago today, he killed himself in his Pennsylvania apartment by swallowing 150 Phenobarbital tablets. It was a tragic end for a brave, visionary and ingenious warrior, whose indefatigable efforts in no small part helped secure non-segregation, equal rights for women, the public outing of COINTELPRO and the end of the Vietnam War. He enlightened a nation, called them into action and never never never gave up the good fight.

In memory and in the spirit of Abbie Hoffman – to all those who can sustain their convictions – Hasta la Victoria Siempre!